Gullak – a web series that went live on Sony Liv on June 27, 2019, is created by The Viral Fever. Set in Northern India, Gullak comprises of various anecdotes and takes you on a journey along.

The series primarily revolves around Mishra family, which comprises of 4 members, namely, Santosh Mishra (father), Shanti Mishra (mother), and their 2 sons Anand Mishra and Aman Mishra. The series has 5 episodes and has efficiently covered the major squabbles that happen in Mishra family. The family has another significant member ‘Gullak’ which is not acknowledged though by the other members of the family. It is through him that we get the peek into Mishra family.

Anand, commonly known as Annu is SSC aspirant who is also the oldest son. He is seen lurking around most of the time and according to their neighbor has started smoking. Aman, the younger brother makes his first presence while crying, as he has been beaten up. Annu comes to his rescue and both the brother leaves. Santosh Mishra works in the electricity department.

The Mishra family is just like any other middle-class family; they will be motivated to do stuff only when they see their neighbors doing it. In the very first episode, they start discussing about rebuilding their house and the conversations that happen can both crack you up and make emotional at the same time. The constant bickering that goes on in the family is in particular hilarious because that is something that reminded us of our families.

The tension that Shanti Mishra has and the description by Gullak make us curious to watch further to find out what happened with Annu. The chilled out attitude of Santosh Mishra and their attempt to send away Bittu Ki Mummy, the neighbor, is a technique we were completely unaware of.

There are serious situations conversations happening as well, but how they change their course and are made funny is a skill that must be learned.

What makes it a must watch is the fact of it being so close to reality. The family is just like any other crazy family, sometimes quarreling, sometimes laughing together and at the other, wiping away each other’s tears.

The Viral Fever has yet again made its viewers proud and has met their expectations.  The third person narrative technique has been used previously as well, but letting the Gullak narrate it, is a new idea. The idea of how we take things for granted and considers them as nothing more than things will surely change after watching Gullak. They become as much a part of the family as the members, even if for the short period that they live. The track that has been composed will instantly put a smile on your face.

We recommend everyone to watch this with your family.

Watch the trailer below or head over to TVF’s youtube channel. 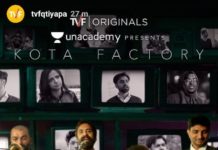