Esha Gupta started her career with the Femina Miss India contest in 2007, where she placed third and won the Miss India International title, and later she represented India at Miss International pageant. She soon received offers for film roles, and made her acting debut with crime thriller Jannat 2, that fetched her a nomination for the Filmfare Award for Best Female Debut. Esha received praise for her portrayal in the political drama Chakravyuh  but her performance in the comedy film Humshakals met with negative reviews. She had her biggest commercial successes with starring roles in the horror film Raaz 3D and the suspense thriller Rustom.

Recently, Esha was seen sporting just a robe before her actual get up clicked pictures sipping coffee in her vanity van.  Actress posted a series of images on her Instagram account.

She posted the first photo along with a caption,” Starbucks so good? #pose#VanitySanity ???? @aliyashaik28″

If you have anything to say related to this article.. Comment in the given box below…:)

Esha gupta opts for traditional dress in her latest pictures 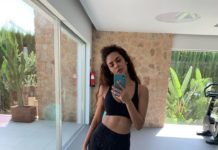 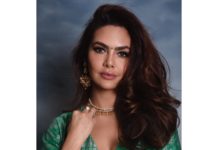 Esha Gupta continues to impress with her fitness skills [VIDEO]