The Indian Wire » News » SC decriminalises homosexuality, “I’m what I am. So take me as I am”, says CJI before passing landmark verdict 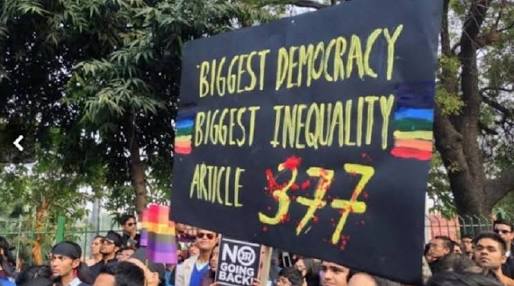 In a historical judgement, the Supreme Court on Thursday decriminalised homosexuality by partially striking off Section 377, reported The Hindu.

In his judgement Chief Justice of India, Dipak Misra said, “I am what I am. So take me as I am. No one can escape from their individuality.”

In a combined judgement announced by CJI and Justice Khanwilkar, they said that the British era old Section 377 will not be applicable in cases of consensual sex by homosexuals, heterosexuals, lesbians and other sexual minorities. But the Section withholds in cases of bestiality like sex with animals and non-consensual sexual acts.

The apex court in its verdict said, “The LGBTQ community needs the rainbow of hope for the sake of the humanity. They should be allowed to live with dignity and without pretence. This is their journey to dignity, equality and liberty. It is time to bid adieu to prejudicial perceptions deeply ingrained in social mindset. It is time to empower LGBTQ community against discrimination. They should be allowed to make their choices.”

The only woman judge on the bench Justice Indu Malhotra in her judgement asserted that history owes an apology to the LGBT community because of the stigma associated with them. She said, “History owes an apology to members of LGBT community and their family members for ostracisation and persecution they faced because of society’s ignorance that homosexuality is a natural trait, its penal suppression infringes a host of fundamental rights.”

In his verdict, Justice Chandrachud stated that Section 377 is based on ‘gender rooted stereotypes’. He also termed criminalising homosexuality as “unconstitutional”. Justice Chandrachud said, “Tragedy and anguish inflicted by Section 377 should be remedied. Macaulay’s legacy exists 68 years after the coming of a liberal Constitution. Human instinct to love has been constrained. Sexual orientation has become a reason for blackmail on the internet.”

“What is the ‘order of nature’? State cannot decide the boundaries between what is permissible or not. Section 377 is based on deep-rooted gender stereotypes. It persecutes people. It is a majoritarian impulse to subjugate a sexual minority to live in silence”, he added.

Justice Chandrachud averred, “This case is much more than just decriminalising a provision. It is about an aspiration to realise Constitutional rights and equal existence of LGBT community as other citizens.”

Justice Nariman in his verdict announced that as per the recently passed Mental Healthcare Act, it declared that homosexuality is not a mental disorder. The Centre should take steps towards removing the stigma that follows homosexuality.

It’s a day of celebration for all of us. The hard work of many activists, people from the LGBTQ community finally paid off. India is proud today!

Red flags cover streets of Delhi, as thousands of farmers protest in the capital
Bharat Bandh : Section 144 imposed in many districts in Madhya Pradesh
Comment