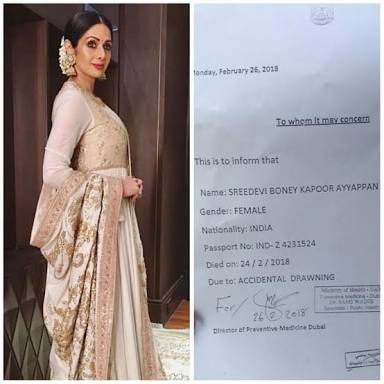 “Following the completion of post mortem analysis, Dubai police headquarters today stated that the death of the Indian actress Sridevi occurred due to drowning in her hotel apartment’s bath tub following loss of consciousness,” the Dubai government’s media office said on Twitter.

This dramatic twist to her sudden death has stunned legions of fans and industry colleagues.

The Dubai government also said in a tweet that the police have transferred the case to the “Dubai Public Prosecution” which will carry out regular legal procedures followed in such cases.

It is not clear what caused Sridevi, 54, to lose consciousness, and whether the initial report of her death due to cardiac arrest still holds. Her death, which was first reported at around 3am on Sunday in India, sent shock waves across the country with those who knew her at a loss to explain how she could have suffered cardiac arrest at such a young age.

The latest report of accidental drowning only deepens the mystery surrounding her death. Her family has not commented beyond their initial statement yesterday to announce the death, and has requested the media to not contact them as they deal with the tragedy.

The Dubai-based Gulf News said in a report that the actor was under the influence of alcohol. She fell into the bathtub and drowned, it added. However, this could not be independently confirmed.

Gulf News also attached a copy of the UAE government’s forensic report on its Twitter handle. The report, citing accidental drowning as the cause of death, has a stamp of the “Ministry of Health UAE” and the director of preventive medicine, Dubai, Dr Sami Wadie.

The report mentions the actor’s full name, “Sreedevi Boney Kapoor Ayyappan”, her passport number, date of the incident (February 24, 2018) and cause of death.