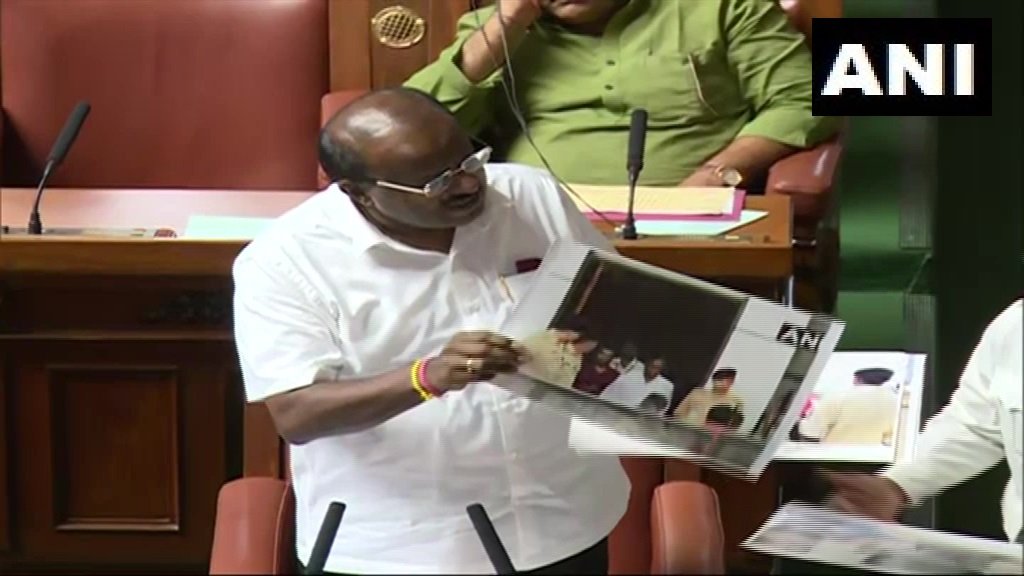 HD Kumaraswamy said, ‘I leave the decision on the floor test to you (the Speaker). It won’t be directed by Delhi. I request you to protect me from the letter sent by the Governor’.

Karnataka Chief Minister HD Kumaraswamy in state Assembly: I leave the decision on the floor test to you (the Speaker). It won't be directed by Delhi. I request you to protect me from the letter sent by the Governor. https://t.co/zUHJxNKpIZ

He further added that he has respect for the Governor. ‘But the second love letter from the Governor has hurt me. He only came to know about horse-trading 10 days ago?’, Chier Minister added while showing that photos of BS Yeddyurappa’s PA Santosh, reportedly boarding a plane with independent MLA H Nagesh.

H Nagesh was among who rebels who tendered his resignation to Assembly Speaker and announced his support to Bharatiya Janata Party.

While earlier in the day, the Karnataka Assembly skipped the deadline set by the Governor Vajubhai Vala to the Assembly to prove majority by 1.30 pm on Friday. Following which the Assembly Speaker KR Ramesh Kumar Ramesh Kumar adjourned the House till 3 pm.

Adjourning the house, Assembly Speaker said, ‘Governor’s order has to be followed or not, it has to be decided by Chief Minister HD Kumaraswamy because the letter was sent to him, so he has to decide’.

The Supreme Court on Wednesday ruled that the 15 rebel MLAs cannot be compelled to take part in the proceedings of the House.

You can reach out to us at [email protected]om and we will get back in minutes.