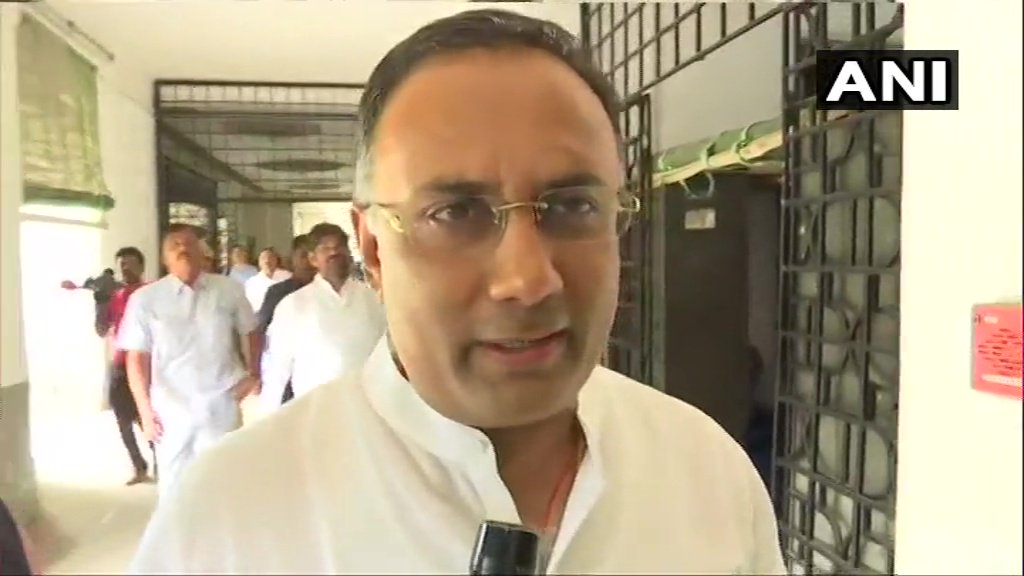 Amidst the ongoing political crisis in Karnataka, Congress on Tuesday held its Legislative Party (CLP) to review the political situation of the state. The meeting was called to make efforts to keep the 13-month-old government intact.

The meeting was attended by all the MLAs and top leaders of the party.

Speaking to media after the meeting, Congress Leader DK Shivkumar slammed the BJP and accused it of being involved in Karnataka Episode. Shivkumar said, ‘Mr Rajnath Singh is telling that ‘we are nowhere bothered, we are not interested, we don’t know about this’ (political situation in Karnataka). BS Yeddyurappa is also saying the same, but he is sending his PA to pick up all our Ministers’.

DK Shivakumar, Congress: Mr Rajnath Singh is telling that 'we are nowhere bothered, we are not interested, we don't know about this' (political situation in Karnataka). BS Yeddyurappa is also saying the same, but he is sending his PA to pick up all our Ministers. #Karnataka pic.twitter.com/WEhaap5Lrx

While earlier on Monday, all the JD-S and Congress Ministers step down from the making in a bid to accommodate the rebels in the cabinet to keep the government intact.

BJP, in the meantime, demanded the resignation of Chief Minister HD Kumaraswamy for losing the confidence of the house.

Bharatiya Janata Party (BJP) State President BS Yeddyurappa said that government has no majority in the house and have no moral rights to continue.

The quick turn of events comes days after 11 MLAs from Congress–JD(S) ruling coalition meet Assembly Speaker on Saturday and tendered their resignation giving a big blow to the coalition government.

With the resignation of 11 MLAs of Congress-JDS and 2 Independent MLAs, the coalition government reduced to a minority with 104 MLAs which is 9 less than the required figures.

Speaking to media, Assembly Speaker KR Ramesh Kumar on Tuesday said, ‘I am nowhere related to the current political developments. I am acting as per the Constitution. Till now, no MLA has sought an appointment with me. If anyone wants to meet me, I will be available in my office’.