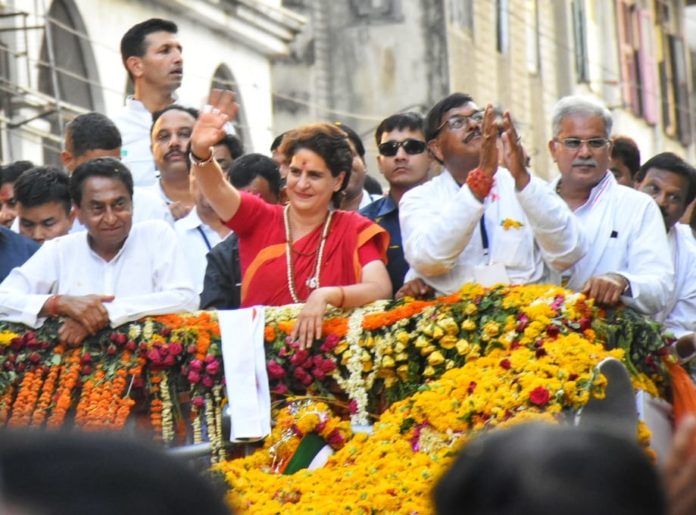 Congress General Secretary for Uttar Pradesh East Priyanka Gandhi Vadra will visit Uttar on Tuesday for the first time after the party poor show in the recently held national polls. Gandhi is expected to review the poll disaster in the state where she has been given the responsibility to revive the party eyeing 2022 state polls.

She will visit Rae Bareli, the lone Lok Sabha Seat, that elected a Congress nominee.

Along with her, Congress General Secretary for Uttar Pradesh West Jyotiraditya Scindia will hold review meetings in Delhi on June 11 and in Lucknow on June 14 to deliberate upon the reasons behind party humiliating defeat.

According to sources, all the district presidents from the eastern part of UP have been invited for marathon meetings which will go till late in the presence of secretary in-charges of eastern Uttar Pradesh.

Earlier on June 4, a meeting was held at Priyanka Gandhi’s residence in the national capital to discuss the reasons behind party poor show in the polls concluded on May 23. The meeting was attended by UP State President Raj Babbar and other general secretaries, including Jyotiraditya Scindia.

The meeting was conveyed to build the party again at the block level, after its crushing defeat in the elections.

Earlier on May 30, Uttar Pradesh Congress Working Committee (CWC) called a meeting on to discuss the reasons behind the party’s poor performance in the state that sends 80 Parliamentarians to the Lok Sabha.

While Congress President Rahul Gandhi failed to retain its stronghold Amethi and lost to BJP’s Smriti Irani by 55,000 votes. Gandhi taking moral responsibility of the defeat had offered to step down from his post at the Congress Working Committee (CWC) meeting held on May 25.