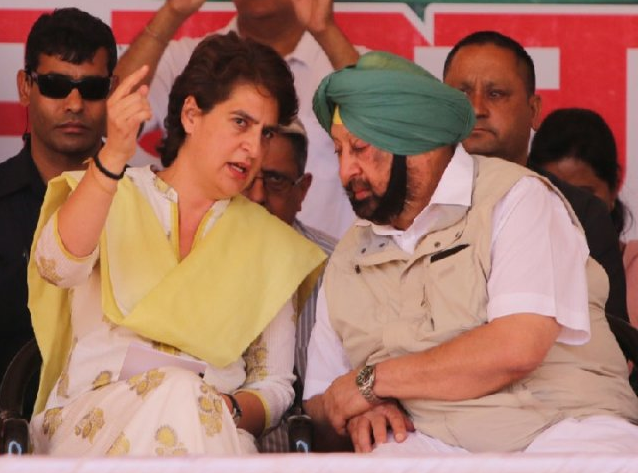 Punjab Chief Minister Captain Amarinder Singh on Monday backed the name of Priyanka Gandhi for the next President of the Congress and said he will be ideal ‘person’ to lead the grand old party after Rahul Gandhi.

Talking to media in Chandigarh, Punjab Chief Minister said in his view Priyanka Gandhi would be a perfect choice for the president of the Grand Old Party, Indian National Congress.

Further backing Priyanka Gandhi’s name for the top post, Singh said he has no doubt that Priyanka Gandhi would get support from all file and rank across all states. He added Priyanka Gandhi is the only leader who is a good bet to replace Rahul Gandhi.

Talking about Rahul Gandhi’s resignation from party’s top post, Punjab Chief Minister regretted the decision of stepping by saying that ‘This is Young India, and will only respond to Young leader’.

“Priyanka broached everything with determination, commitment and courted arrest with a smile. Her being in custody was uncalled for. She displayed tremendous composure in those circumstances. It’s my humble appeal that she would be apt as the party President to lead ahead”, Shatrughan Sinha said in a tweet backing Priyanka Gandhi on July 22.

Congress General Secretary for Uttar Pradesh East Priyanka Gandhi was detained early this month by the Uttar Pradesh Police when she was on her way to Sonbhadra to meet the family of those killed in July 17 firing incident.

Uttar Pradesh Police, citing the imposition of Section 144, taken Priyanka Gandhi into detention. She was later taken to Chunar Guest House, Mirzapur from Varanasi. The whole Episode had upped the political temperature of the state.

It should be noted that Rahul Gandhi, had on July 3, officially step down from Congress President Post saying that he is responsible for the loss of the 2019 elections.