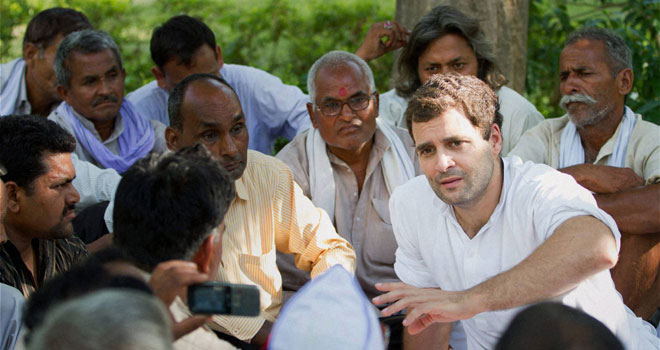 Rahul Gandhi met farmers from Amethi whose land had been acquired for widening a national highway and assured them of all possible help.

Congress Vice-President Rahul Gandhi visited his constituency in Uttar Pradesh on Tuesday to meet the farmers whose land had been acquired by the NHAI.

National Highways Authority of India (NHAI) started working on widening NH 56 at Kathora Gram Sabha in Amethi’s Jagdishpur block a year ago. A few days back the farmers of the region complained that NHAI was demolishing houses and shops without giving proper compensation.

Rahul Gandhi met the complaining farmers and assured them that the party will provide all possible help to solve their problems. Apart from meeting the farmers, he also met the officials of NHAI and asked them to carry forward the demolishing in a systematic way. He told the NHAI officials to adopt proper procedures to compensate those affected or shift the bylane.

According to local Congress leaders, the farmers had already given their farms to NHAI but it was also constructing a bylane for parking trucks on both sides of the road in an area of around 200 m in Kathora, affecting about 100 families.

After Gandhi left the farmers said that Rahul has assured to provide all possible help to them.

SoftBank reportedly in talks with Flipkart to invest ₹13000 crore
Govt will continue with the current price scheme till 2018: Ramvilas Paswasn