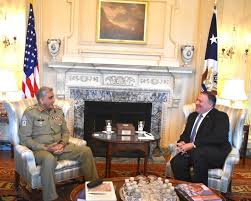 On Wednesday, General Asif Ghafoor, the spokesperson for Inter-Service Public Relations (ISPR), gave a detailed update over the bilateral military official’s engagements in Washington DC via a series of tweets.

Bajwa also participated in a delegation that headed to the White House, accompanying Khan on his visit.

US military leadership and Bajwa discussed regional stability, security situation, and bilateral cooperation between the US and Pakistan.

On his official Twitter handle, ISPR director Ghafoor said, “US leadership acknowledged contributions of Pakistan Army in the war against terrorism and [its] role towards the Afghan peace process.”

COAS interacted with US Military leadership at Pentagon. Regional security situation and bilateral military cooperation discussed. US leadership acknowledged contributions of Pakistan Army in war against terrorism and role towards Afghan peace process. (1 of 2). pic.twitter.com/E0XrHgYhpd

The ongoing Afghan peace efforts topped the discussion during Bajwa’s meeting with Pompeo during which they hailed the importance of key bilateral cooperation between two sides.

Bajwa was quoted by Ghafoor as saying: “Pakistan attaches great importance to restoring a robust bilateral relationship based on mutual respect, trust and shared values.”

COAS visited US State Department and called on US Secretary of State Mike Pompeo. The two discussed regional security issues especially focussing on Afghan peace process, noting the importance of an Afghan led and Afghan controlled solution. (1of2). pic.twitter.com/ANdzb5OT4I

During his meeting with Senator Lindsey Graham and former US General Jack Keane, the COAS stated healthy ties between two nations were vital for regional stability.

“Bilateral relationship holds potential for both countries and would also assist in regional stability,” Gen Bajwa was quoted as saying.

COAS apprised them of the improved security situation in Pakistan and the resulting opportunities for foreign businesses to invest in Pakistan. “Bilateral relationship holds potential for both countries and would also assist in regional stability”, COAS.(2of2). pic.twitter.com/26BnAWqbrD

Moreover, the army chief briefed Keane and Graham over the enhanced security conditions of Pakistan, highlighting the “resulting opportunities” for international businessmen and investors.