Berlin, Sep 19: German authorities announced on Wednesday it extended arms embargo to Saudi Arabia that will continue to remain in place till March 2020, government’s spokesperson said, according to news reports.

German Chancellor Angela Merkel was quoted by DW as saying she saw “no confidence, at the moment, for a changed stance” from Germany’s side.

In March, Merkel’s allied government extended an official ban on weapons exports by six months to Saudi Arabia, which was instituted in February in response to US journalist Jamal Khashoggi’s murder in Saudi consulate of Istanbul on October 2, 2018.

However, the arms export ban has faced several oppositions from the European Union and within the German government but has received backing from the rights groups.

Berlin has responded to Khashoggi’s killing by declaring a cease on weapon supplies and sales to Saudi Arabi and others involved in the war in Yemen.

Since then, it has faced strong criticism from the EU partners as they said the ban impacted their joint defence projects such as the Tornado jets and Eurofighters.

Though Britain and France have urged the German government for ban relief, human rights groups have argued that the imposed ban should remain at the place, that has been backed by junior partners to Merkel’s conservative CSU/CDU, centre-left Social Democrats (SPD). 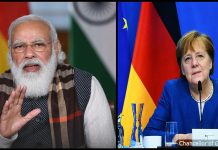