Male, Sep 4: India and Maldives have on Tuesday inked a Treaty in Mutual Legal Assistance in Criminal Matters – the first MLAT inked by the Maldives and agreed to extend support and assistance in probing and prosecuting criminal matters.

#Maldives and #India exchanged the Treaty on Mutual Legal Assistance in Criminal Matters today. This is the first MLAT signed by the #Maldives. Through the Treaty both countries agreed to extend assistance and support in investigating and prosecuting criminal matters.
🇲🇻🇮🇳 pic.twitter.com/bfHnR5C72s

Jaishankar, who arrived in Maldives on September 3 to address the OIC, marked the first official visit to the nation after assuming the office as EAM. He was received by State Minister Khaleel and Foreign Secretary Ghafoor at the airport.

An MLAT is a pact between two or more nations for the purpose of summoning and exchanging data in efforts to enforce civilian laws and criminal laws, according to The Hindu Business line.

“Both Ministers expressed their commitment to continuing the high level of engagement, within the framework set out during the summit meetings between President Ibrahim Mohamed Solih and Prime Minister Narendra Modi in December 2018, and July 2019, respectively,” the statement added.

1. The Indo-Pacific is as much our past as it is our future.
2. The Indo-Pacific must be perceived as a further extrapolation of our Act East-Look East policy
EAM @DrSJaishankar delivering a Keynote at the #IndianOceanConference #IOC2019 in the #Maldives@MEAIndia @MDVForeign pic.twitter.com/dsfhCDb6ji

During his meeting with Shahid, they inked a treaty on Mutual Legal Assistance, hence expanding the bilateral cooperation between the two nations.

Glad to be back in Maldives. Thank FM @abdulla_shahid for the warm reception & for hosting the 4th Indian Ocean Conference. Reviewed our excellent relations & progress in ongoing projects. pic.twitter.com/y4WKC1X21o

The EAM also held a “warm” meeting with secretary-general Sayyid Badr bin Hamad Albusaidi on the sidelines of the OIC meet. He tweeted: “Value our strategic partnership. Committed to work together closely.”

Jaishankar also met with the speaker of Majlis, Mohamed Nasheed, and discussed working closely together to realize nations’ shared goals.

Great to catch up with Speaker of Majlis @MohamedNasheed. Always full of ideas and infectious enthusiasm. Will work closely to realise our shared goals. pic.twitter.com/psuucjKK1o 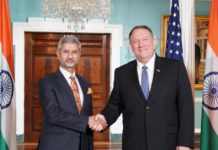