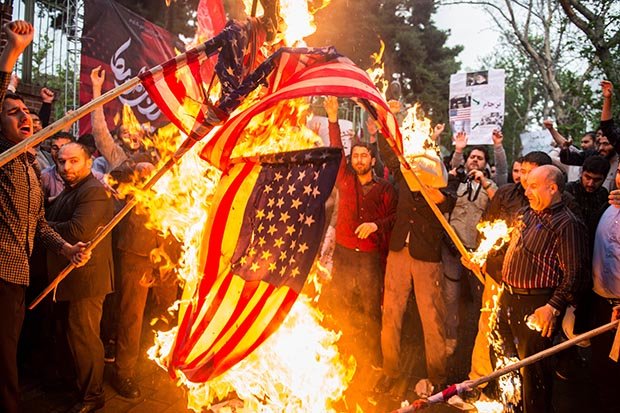 Dubai/Baghdad, May 31: Tens of thousands of Iraqis and Iranians have on Friday marched, marking the annual “Quds Day”, Jerusalem Day, in the Islamic Republic, to condemn the Middle East peace plan which United States President Donald Trump lauded as the “deal of the century”.

State-run television said marches were being carried out in some 950 communities across Iran and performed demonstration carrying out banners having slogans such as “Death to America” and “Jerusalem is the eternal capital of Palestine”, according to Reuters news reports.

Trump’s peace plan seeks to encourage investment in the Gaza Strip and the West Bank by Arab donor nations before struggling with political issues.

Palestine’s officials have already rejected it, believing the plan would be heavily biased in favour of Israel, with Iran saying Trump’s peace plan would fail.

“No to the deal of the century” read a banner covered across the news channels on state TV, which also showed Iraqi marching to mark Quds Day in the capital Baghdad, where thousands of powerful Shi’ite militants took to the streets.

“Al-Quds day in Baghdad, in other Iraqi provinces, and across the world, expresses a rejection of the ‘deal of the century’, which is being planned by Trump in order to dissolve the Palestinian cause in own way,” said Mo’een al-Kathem, a member of Baghdad’s provincial council.

Ayatollah Ruhollah Khomeini, the Islamic Republic of Iran in 1979, has launched the Quds Day, which held on the last Friday of Muslim month of Ramadan.

Iranian President Hassan Rouhani said after joining the march on Friday: “Undoubtedly, the deal of the century will become the bankruptcy of the century and will not lead anywhere,” IRNA reported.

“The strategy of Lebanon’s Hezbollah, Islamic Jihad, and Hamas has led to Israel’s successive defeats in recent years and if Israel makes the smallest move today it faces a barrage of Palestinian missiles,” Revolutionary Guards spokesman Ramezan Sharif was quoted as saying by Tasnim news agency.