The Indian Wire » World » The Slap Dance on Schulz and Merkel: Leaving Berlin Lawless and in Peril 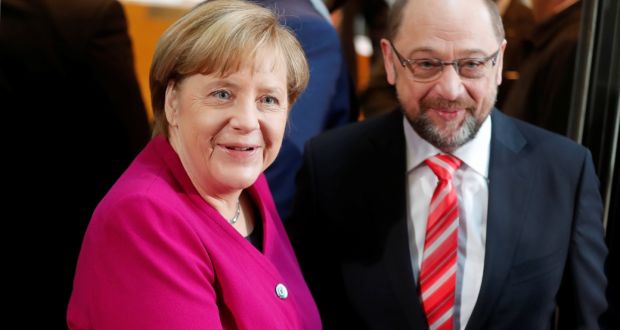 Berlin is the capital of Germany and one of its 16 constituent provinces. Being the seat of power, it has seen a lot of political dramas over the years. in the recent times, it is witnessing the politics over formation of coalition government between SPD, headed by Martin Schulz and CDU, headed by Chancellor of Germany, Angela Merkel.

The Dance of Democracy

The battle between supporters and opponents of a new “grand coalition” has been hard-fought, and at times emotional. SPD insiders privately expect that a majority, perhaps around 60%, of delegates will back the leadership and endorse the talks. Germany went one step closer to putting a government in place, after parliamentary elections in September 2017 left the Bundestag fragmented and without a clear majority. After a week of exploratory talks, the center-right Christian Democratic Union (CDU), the Christian Social Union (CSU), and the center-left Social Democratic Party (SPD) reached an agreement on the morning of Jan. 12 to prepare formal coalition negotiations. But after more than four months of talks, crises and restarts, coalition talks in Berlin have gone down to the wire in a stand-off over health and labour market reform.

What are the main arguments on both sides?

Curbing the use of temporary work contracts and trying to narrow differences between Germany’s public and private health insurance systems. The preliminary blueprint agreed by the parties last week is broadly unambitious and omits major SPD demands like higher taxes on the rich and a consolidated public health insurance system. Crucial euro-zone reforms, like the completion of banking union, go ominously unmentioned.

SPD left-wingers and its youth wing are campaigning to sink any deal that permits arbitrary hire-and-fire laws, often offered to younger workers. The CDU, meanwhile, is resisting demands to end Germany’s two-tier health system that, critics say, allows wealthier private patients buy their way to the top of the queue.

To secure a fourth term in office, Merkel needs the center-left SPD to agree to a re-run of the coalition government that has ruled Europe’s biggest economy since 2013.