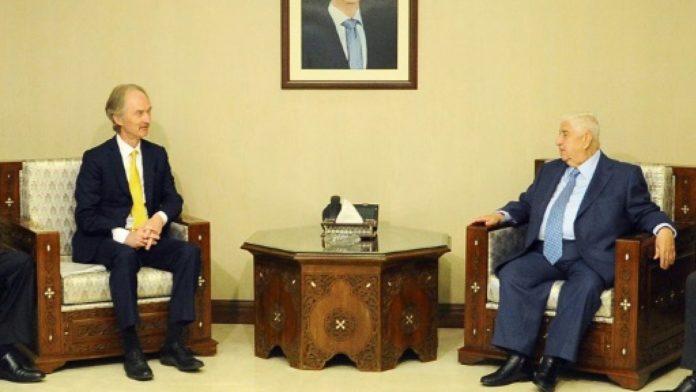 The United States (US) envoy has held “substantial” discussions with Syrian foreign minister Walid Muallem on Sunday, in Damascus, to pave out political settlements to the country’s eight-year-long war.

According to Dawn news reports, after the meeting, Norwegian envoy Geir Pedersen told reporters, “We have had very detailed substantial discussions.” He said, “We are now addressing all the issues so all the issues are at the table,” without providing further specifying.

Pedersen said he was also slated to hold more discussions with officials from Syria later in the day. He added, “Let’s see how we are able to proceed later this afternoon.”

Syrian state-run SANA news agency stated Muallem and Pedersen discussed the ongoing world powers’ efforts to advance the Syrian political process, including steps to establish a committee, to be tasked with drawing-up a post-war constitution.

Pedersen has arrived in Damascus on Saturday, marking his third official trip to Syria since assuming the office in January. He became the 4th United Nations (UN) negotiator aiming to resolve the Syrian conflict, following Staffan de Mistura, his predecessor’s resignation.

Since then, Pedersen has travelled extensively to hold meetings with the opposition, government and others. The United Nations security council (UNSC) continue to remain deeply divided over the path forward in Syria.