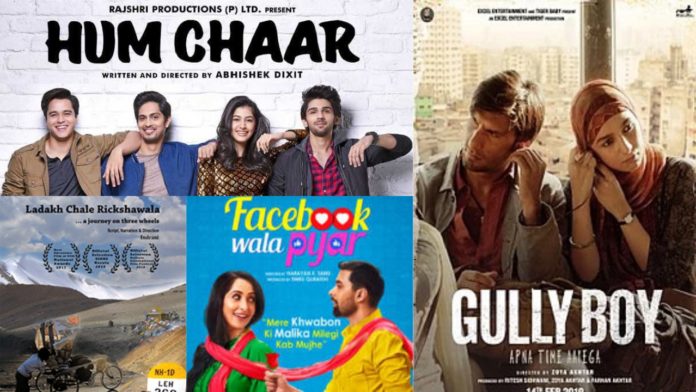 Much awaited and highly anticipated movie ‘Gully Boy’ is scheduled to release this week along with three other Bollywood movies, along with a documentary.

Based on the street rappers Divine and Naezy from Mumbai, the film stars Ranveer Singh and Alia  Bhatt among others. The film is helmed by Zoya Akhtar and bankrolled by Ritesh Sidhwani, Zoya Akhtar and Farhan Akhtar.

It had its world premiere at the Berlin Film Festival this year and it explores the tale of slum boys who introduced real hip-hop to India.

‘Hum Chaar’ is the story of four college friends who are inseparable during college days but time tore them apart. In spite of losing touch with each other, they have all the information about each other’s whereabouts.

The film directed by Narayan K Sahu and produced by Tinku Quaraishi stars Rahul Bagga and Nancy Thakkar in lead roles and Rajesh Sharma, Akhilendra Mishra and others in supporting roles.

The synopsis of the Bollywood romantic comedy reads, “What would you prefer – Arranged marriage or love? The answer to this question is pretty easy for our protagonist Raj Kuwar Chaturvedi.

Born into a family where people have always opted for the more orthodox arrange marriages, Raj is a rebel. A rebel who ceaselessly negates any effort by his lawyer father to get him married. Reason – he does not want to settle for an arranged marriage.

And as the father worries, Raj does find love. But in the most unlikely manner, on Facebook. He falls in love with a girl he has never met, or for that matter seen in real life. A girl, who refuses to even put up her own photograph on her profile.

What happens when they finally meet offline, in the real world? Does Raj actually find the love of his life? Or is it all going to be in vain?”

As the synopsis goes, “Ladakh Chale Rickshawala is based on three journeys: A rickshaw puller’s journey from Kolkata to Ladakh, traversing 3000 km through the heart of northern India, crossing the different cultures of the multihued country in his tri-cycle Rickshaw, a filmmaker and her team’s journey to make a film on the rickshaw puller’s mammoth journey to Ladakh with very meagre financial resources and the journey of the rickshaw puller’s wife to survive with her daughter in spite of her husband’s tremendous wanderlust. How will they reach their destinations?