The Indian Wire » Entertainment » Deepika, the undisputed queen of Bollywood, is all set to be a Rani once again With the huge success of Padmaavat at the box office, Deepika has indeed proved herself to be the reigning queen of Bollywood. After playing the role of rani Padmini with so much confidence and gravitas, Deepika will once again be seen as a queen, only this time she will play a mafia queen.

Vishal Bhardwaj is coming up with a movie based on the life of mafia queen Ashraf Khan, also known as Sapna Didi, in which Deepika will essay the eponymous role. It is being reported that the movie will be titled ‘rani’ owing to the majestic stature of the gangster.

If sources are to be believed, Deepika has already started preparing for the role and is trying to get into the skin of the character to mark a complete shift in her upcoming performance. “Deepika has already started the preparation for her role of a mafia queen and she is quite particular that she gets the tonality and body language as close to the late Sapna Didi who was once a terror for other gangsters. The shoot will begin by early March in Mumbai. After Padmaavat, her fans will love to see her in a whole new avatar of a lady don and hence she is really working meticulously to strike the right chord”, a source was reported saying.

The movie will also feature Irrfan Khan playing the role of Deepika’s husband. The duo was previously seen together in Shoojit Sircar’s Piku and was well appreciated for their unique yet charming chemistry. 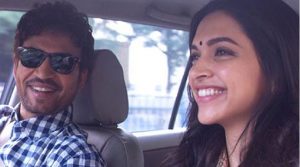 The movie was earlier planned to be directed under Honey Trehan but due to creative incoherence between the two, Vishal has decided to take over the project and will now be directing the movie himself. Vishal was reported saying, “Due to different artistic visions of the film, Honey (Trehan) and I jointly came to the decision that it would be best if I took over as director and saw it through to the end”.

The movie is going to be the first ever collaboration of Deepika and Vishal Bhardwaj and knowing the level of talent they both possess, we only have high hopes from this project.

Ekta Kapoor’s big statement on casting couch: Actors also use their sexuality to get roles
Guess who was offered to play Khilji before Ranveer Singh?