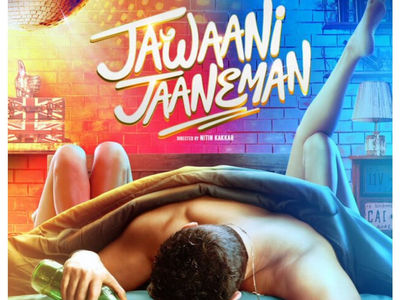 The release date of the upcoming film Jawaani Jaaneman that stars actors Saif Ali Khan and Tabu has been changed yet again. The film is now scheduled to release on 31 January next year. The film was originally slated to be released on 29 November this year but was later pushed to 7 February next year.

Film trade analyst and critic Taran Adarsh shared the information on his verified Twitter page along with a teaser poster of the film. The poster features a drunk man holding bottles of alcohol in his hands and lying on the bed. The face of the actor is not shown but it is likely to be Saif Ali Khan.

The film marks the debut of veteran actor Kabir Bedi’s granddaughter and actress Pooja Bedi’s daughter Alaia F. It also brings Tabu and Saif together on the big screen after over two decades. The two had earlier acted in films like Hum Saath Saath Hain and Biwi No. 1.

Talking about working with Saif again, Tabu told Mumbai Mirror, “This is a different film and it’s amazing to work with Saif after so many years. We did Biwi No. 1, but we did not have any scenes together. Saif has a great sense of humour and I was looking forward to doing this kind of film with him.”

During an interview with Mid-Day Saif said, “Tabu is a brilliant actor. This part is funny on paper, and I’m pleased that she has agreed to play it as now it will be hysterical.”