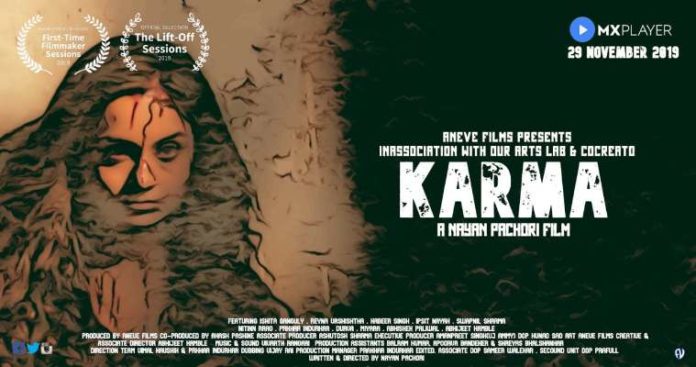 The upcoming horror film Karma that stars TV actor Ishita Ganguly will be releasing on MX Player, an Indian OTT platform and a global offline video player, on 29 November. The  actor who has done a couple of serials like Shastri Sisters, Tu Mera Hero including horror shows like Darr Sabko Lagta Hai and Kaun Hai? will be seen in a horror film for the first time.

Ganguly has won the hearts of the audience with her performance in serial Jag Janani Maa Vaishno Devi – Kahani Mata Rani Ki where she plays the role of goddess Mahakali. Talking about her character in the upcoming film, she said, “My character’s name is Shiva, a housewife. Due to few incidents in her past, her life has become upside down. We all know Karma doesn’t spare anyone.”

The actress took to her social media account, to share the poster of the film which also marks her digital debut.

While implying  how this horror flick is different from others, the actor said, “The film has a very nice tagline, ‘Don’t waste time on revenge. The people who hurt you will eventually face their own karma. It’s not a usual horror film, where you can see ghosts or spirits haunting people.”

Written and directed by Nayan Pachori, Karma is produced by his own production company ANEVE Films.