If you are going for that big party or wedding, Kundan Meena is the best kind of jewelry you can choose. See this post to know about this Jaipuri Jewelry!

Most people in this modern era have lost faith in love at first sight. It is impossible, they say. They would want to know the person, how they would look together, what things does he/she go along with et cetera. If that is not enough, financial background matters too and so does the family.

It’s just like buying jewelry and clothes. You would want to touch and to know if it looks good on you. The stones, the make and the price range, all of it matters. It is not easy to settle on something. And it is the most difficult when you have to buy something that sparkles from across the room for that party where every girl wants to look like the Indian doll by combining the ethnic and trendy style in that one piece.

Well, if you are in Jaipur or in any other part of the country, there’s one thing that would help you get rid of this dilemma. Kundan Meena! This diamante jewelry would give you that conventionally beautiful look that would make you stand out of the crowd. It is usually worn in the comination of red colored ‘Meenakari’ with gold plating as the base. With Jaipur being the major hub to buy Kundan Meena, it is easy for the Jaipurites to shop for it. 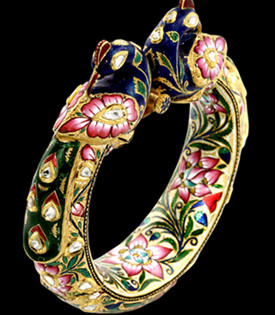 This spectacular form of art originated in our own city which is the reason why it is also sometimes called as ‘Jaipuri jewelry’. It also the oldest and the most popular kind of jewelry form. It was something that was worn only by the royal families or mughal rulers in the past. It is a kind of recognition for the Rajasthani people when it comes to jewelry. It has high demand in the wedding season since it is just the kind of accessory the bride and her kinfolk would want to flash around on the big day.

So coming to the more informative part of the article, you must be wondering, especially those who are not familiar with it, about what exactly it is? The word ‘Kundan’ refers to the gold foil that is used in the ornaments. Kundan comes into being when the gold that has to be used is beaten and then passed through a machine (‘patraa’) to produce a flat sheet. After the base is ready, then gems and stones are set in it. This is where the word ‘Meena’ gets meaning. It comes from the word ‘Meenakari’ which is the art of enameling. It would amaze you how impressively the ‘Meenakars’ perform this delicate work. The technicality of ‘Meenakari’ included pouring of the chosen colors onto the piece of metal (Kundan) of the ornament. Gold is not the only metal which is used as the base. Nowadays, silver and copper are also used for the same. Going into the details of its working is going to bring much admiration in you for the craftsmen. So it would be better that you see the final jewelry pieces that they create and appreciate it more by showing it off to the other ladies. Jaipur being the most popular destination for Kundan Meena, it has numerous stores where you can purchase it and then flaunt it. ‘Kundan Meena Jewelry’ in Brahmapuri and a lot of shops in ‘Johari Bazaar’ should be the places where you can find your love at first sight (for jewelry)!