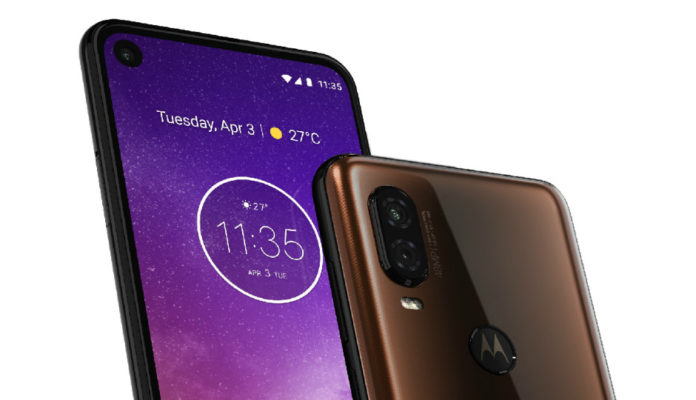 Motorola One Vision has been making news lately with various rumors about the smartphone being circulated online. The smartphone was even spotted on a benchmarking platform last week, where some of the key specifications were revealed. Now, an alleged press render has been leaked online, and separately, some key specifications of the device have also popped up. Motorola One Vision alleged press render reveal a punch-hole display the likes of which has been seen of Samsung Galaxy S10-series. The upcoming Motorola smartphone will reportedly be powered by Samsung’s Exynos 9610 SoC and will be available in multiple variants with up to 4GB of RAM.

The alleged Motorola One Vision renders also reveal a dual-rear camera setup and rear-mounted fingerprint sensor with the Motorola logo painted over it. On the front, the phone can be seen sporting a punch-hole display with minimal bezels and a relatively thicker chin. The display will reportedly have a resolution of 2520 x 1080 pixels with an aspect ratio of 21:9, however, the screen size is not known. The device will be powered by the Samsung Exynos 9610 10nm chipset, as revealed by Geekbench, and will come in 3GB and 4GB RAM variants with up to 128GB of internal storage space. Previously, the Geekbench listing had revealed that the device scored a total of 1,599 in the single core test, and 5,328 in the multi-core benchmark test.

The Motorola One Vision will have a Full HD+ screen resolution of 2520×1080 pixels. There is no information about the size of the device, nevertheless, previous leaks indicated that the Motorola P40 has a 6.2-inch screen. Motorola One Vision will launch with Android 9 Pie and have Digital Wellbeing and support for ARCore. It will also feature proprietary Motorola features such as Moto Actions, Moto Display, and Face Unlock. The phone could also have Dolby audio support.