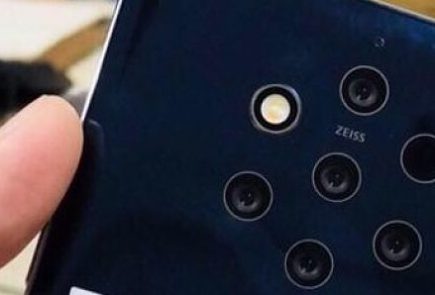 Nokia is on a spree to create some buzz, after Nokia 8 Sirocco, Nokia 9 is the new thing

After being spotted on Samsung Latvia’s buyback portal, Nokia 9 has now been leaked in a live image revealing about its massive battery.

The smartphone, which is talked about to release sometime within this month itself, will sport a Penta-Lens Camera setup & the leaked images claim to support the entirety. The Nokia 9 is also reported to launch sometime this month, and the delay in launch is being blamed on production issues.

The smartphone was also spotted on the Chinese certification site, and a new separate render based on leaks has also surfaced online.

NokiaPoweruser has leaked a live image of the Nokia 9 showing the back of the device. It is seen flaunting the all-new Penta-lens camera setup similar to previous leaks, and the image leaks out the information on the integrated battery as well.

According to the image, the Nokia 9 is expected to pack a 4,150mAh battery that is non-removable. The leaked device is sporting a Blue back, hinting at one of the possible color options at launch as well.

Leaks all along the way

A separate post on Baidu says that the TA-1094 variant tipped to be the Nokia 9, has already passed through the Chinese MIIT certification site.

The report states that the variant passed certification in May itself, however, launch seems to have been delayed for reasons related to the new Penta-lens camera setup.

The post claims that the Nokia 9 has entered the production phase since August itself, but HMD Global is doubling down on strict quality measures, and it won’t launch the device until a considerable lot is produced without issues.

NokiaPowerUser cites its own sources to claim that the Nokia 9 may be launched this month itself, and states that the Penta-lens camera is the reason for slow-scale production.