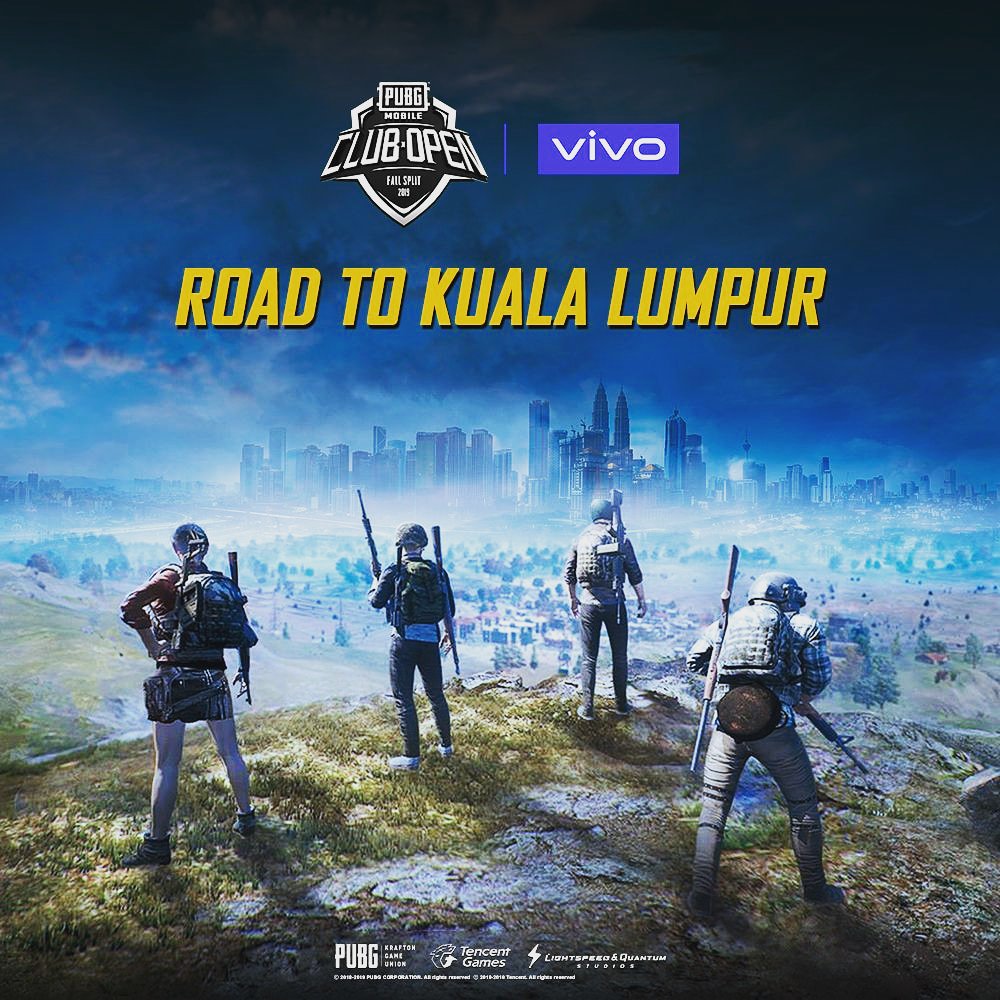 And now we are back again with the next 6 matches as the Day 2 kicks-off. Stay tuned as I will be bringing you all the highlights, MVPs, Points Table and more after every match.

Day 2 started with a bang as Fnatic and TeamSoul were both looking in great touch bagging up 8 and 6 kills respectively. ScoutOP was on fire in the first match as Fnatic finished 3rd with 18 points. But it was ElementriX from Nepal who got the first Chicken Dinner of the day with 10 kills as they wiped out RIPOfficial who had the best zone prediction. ETGBrawlers were once again struggling to find their momentum and finished with just 1 point. TeamSoul seems to be getting back on track as they finished the game at 2nd spot with a massive 12 kill count. ETGBrawlers too had a good match and they finished at the 3rd spot with 5 kills. Synerge grabbed the WWCD and are giving tough competition to Entity who were eliminated early in the match. Not a good match for Fnatic who finished with just 1 point. 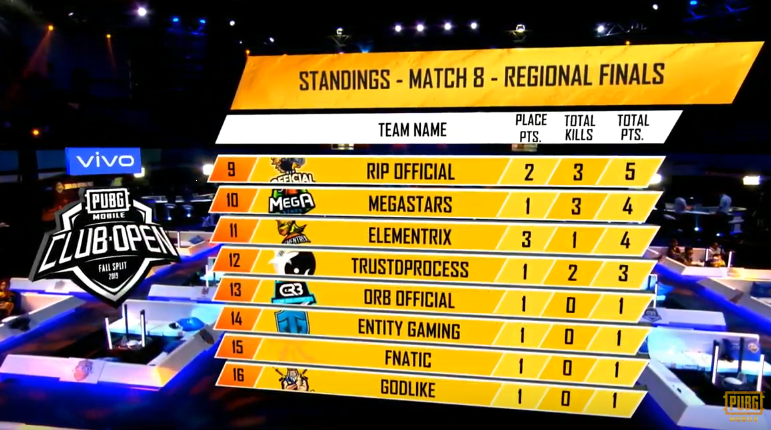 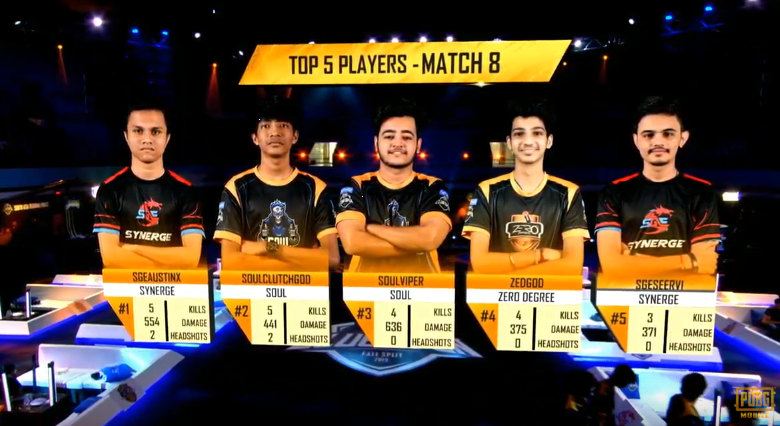 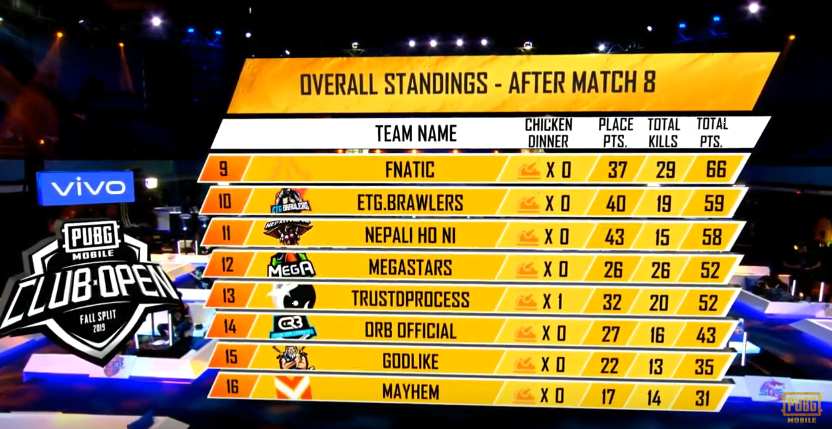 So a turnaround this time as the mYm who were at the bottom of the table showed some really impressive gameplay and registered their first win of the Regional Finals. But it was ScoutOP who was just slaying everyone as Fnatic finished 2nd. TeamINS who were struggling to show their domination until now played really well to finish at the 3rd spot. Another turnaround as GodL finally looking good with the win, after an amazing performance in the Play-ins. GodL doing justice to their name as the 10th match witnessed a godlike play from them bagging 13 kills. TeamINS also looking good as they finished 2nd with 7 kills. ElementriX showing everyone how consistent they are as they once again managed to get to the 3rd spot with 6 kills. 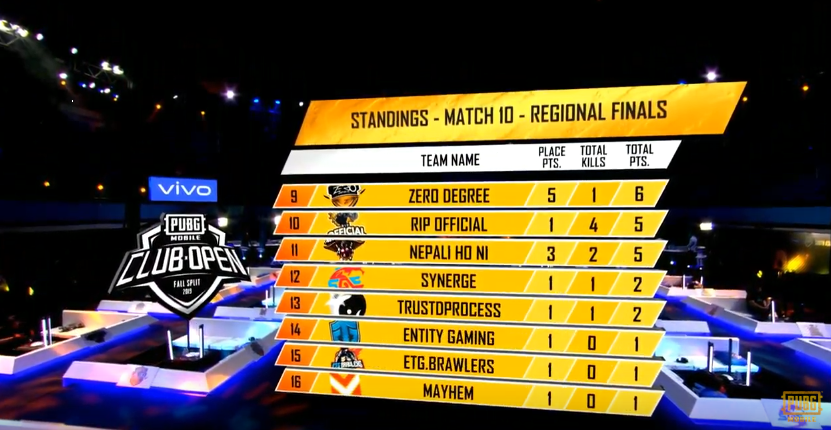 This was the best match of the day. An intense Vikendi bloodbath during the second half of the match. TeamIND were extremely aggressive and bagged the 2nd WWCD of the tournament managing 5 kills. But it was FnaticRonak who was the star of the match. He took his team from 16th to the 4th spot. TeamSoul slowly climbing up the ladder and finishing 2nd. 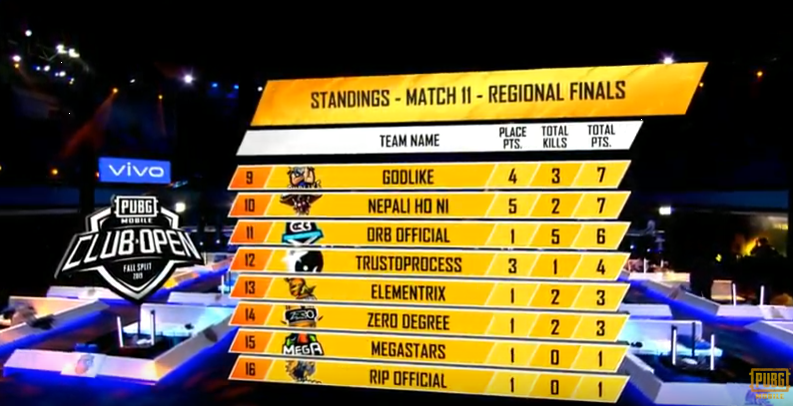 So yes I was wrong when I earlier said that Match 11 was the most intense match of the day. It wasn’t so as the last match was a thriller, leaving the top 8 teams very close to each other on the points table. The final match saw ETGBrawlers stuck on the Water City mountain with everyone surrounding them but they were exceptionally brilliant to survive until the last circle. The last circle was left with a 4V4V4 between TeamSoul, ETGBrawlers, and Synerge. It was Synerge Syrvee who clutched 1V2 against Soul to get the Chicken Dinner. However, TeamSoul by then had managed to get 13 kills with MVP Mortal getting 5 kills alone.

An intense Day 2, ending as a cliffhanger with 6 more matches to be played during the final day. EntityGaming weren’t as good as they were on the first day but they still finished 1st, owing to their excellent first day performances. But it was TeamSoul that started the Day at 9th spot and finished at the second spot and that too without any Chicken Dinner. Day 3 will be like a suspense-thriller movie. So if you live in Delhi do visit the Venue and boost your favorite teams’ confidence by cheering the. Here are the final standings after Day 2: 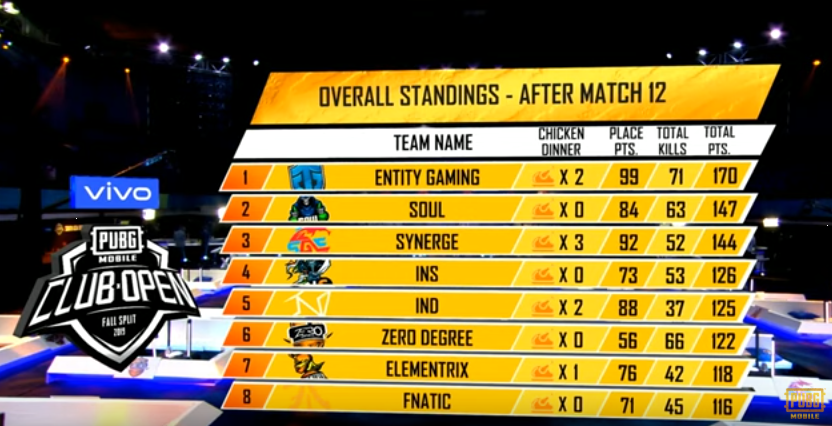