HCIL received its license from Federal Maritime Commission (FMC) and now will be allowed to offer in-flight connectivity and high-quality broad services to the Indian domestic and international airlines and shipping companies shipping within Indian territory.

HCIL has already set up a base mobility platform and is working on enhancing the service in India, according to the company, as reported by Tech Portal.

The FMC license which has been granted is valid for up to 10 years. The company can deliver the service using satellite and telecom networks and will be levied charges according to the revenue generated from its offerings.

The development follows the Department of Telecommunications (DoT) notification for enabling flight WiFi and calls, named as ‘Flight and Maritime Connectivity Rules, 2018’.

The aviation secretary RN Choubey had also commented that the companies interested in providing WiFi connections onboard aircraft can now apply to the DoT for a license, according to a report.

In May 2018, the telecommunications department had approved the recommendations of Telecom Regulatory Authority of India (TRAI) for allowing data and voice services in flights over Indian airspace.

TRAI had recommended that that Indian and international airlines be permitted to offer voice and data services within India’s airspace, above an altitude of 3,000 meters (about 9,850 feet).

The in-flight network will be offered in the airlines through signals from the nearest antenna on the ground or satellites available in space for internet and mobile communications.

This will allow users to connect their devices to a router on the plane. The signals will then be transmitted via satellites to ground stations which will redirect the traffic to a billing server that will calculate the data consumption.

It was reported last year that several airlines are looking forward to offering in-flight service. For instance, citing unknown sources, reports said that popular domestic airline IndiGo was not considering such plans. 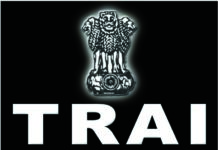