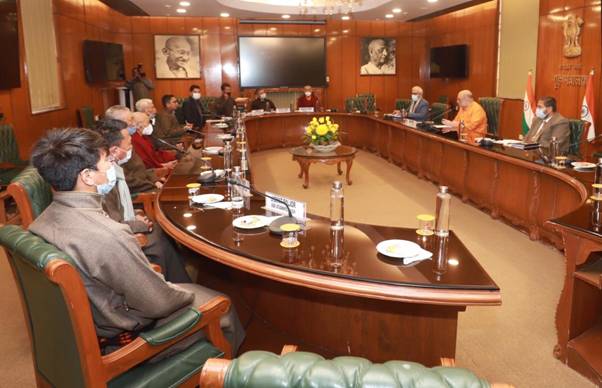 New Delhi: Amid the border tension with China, a 10 member delegation of Ladakh met the Union Home Minister Amit Shah on Thursday.

Given the difficult geographical conditions and strategic importance of Ladakh, all the representatives expressed their concern concerning the conservation of language, culture, and the land of Ladakh, the participation of the people of Ladakh in its development, protection of employment, and changes in the demography of Ladakh region. A protest was also held in this regard before the LAHDC elections.

As per the PIB press release, the Union Home Minister Amit Shah informed that the Union Government is committed to the development of Ladakh and conservation of the land and culture of Ladakh. By conferring the status of Union Territory on Ladakh, the Modi government has displayed its commitment towards fulfilling the long pending demands of the people of Ladakh.

A meeting was held today under the chairmanship of Amit Shah, wherein it was decided that to find an appropriate solution to the issues related to the language of Ladakh, the culture of Ladakh, and conservation of land in Ladakh, a committee will be constituted under the leadership of Sh. G.Kishan Reddy, MoS (Home).

The committee would consist of members of the delegation who met the Hon’ble Home Minister today, elected members from Ladakh, members of the LAHDC Council, and ex-officio members representing the Government of India and the Ladakh administration.