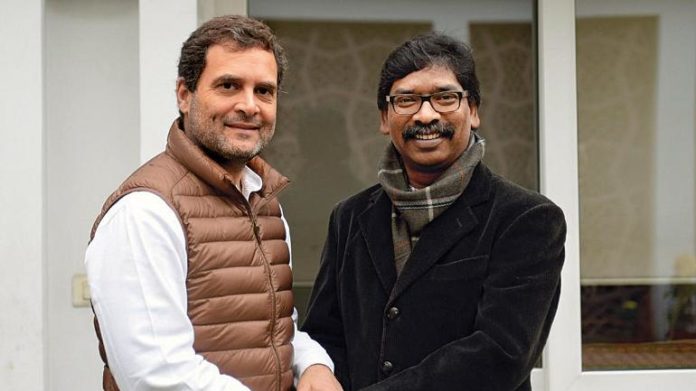 As per the poll-pact, Congress has kept a lion share of 7 seats out of the total 14 Lok Sabha Seats. While remaining seats have been shared with its allies with the Jharkhand Mukti Morcha (JMM) been offered 4 seats, the Jharkhand Vikas Morcha (JVM) has been allotted 2, whereas, 1 Parliamentary Seat has been left for the Rashtriya Janata Dal (RJD). However, RJD is yet to confirm whether it will be a part of Mahagathbandha.

Announcing the poll tie-up on Sunday, JMM’s and Former Chief Minister of Jharkhand CM Hemant Soren said, ‘Talks are still ongoing with RJD, they have not yet agreed. Everyone will support RJD in Palamu Lok Sabha Seat‘.

It is noteworthy that Jharkhand Mukti Morcha working President Hemant Soren met with Congress President Rahul Gandhi on Feb 8 to pave the way to cement Grand Alliance to take on BJP in the mega battle of ballots. The past Alliance of JMM and Congress split after 2014 State Polls.

Noteworthy, Hemant Soren’s JMM has also stitched Alliance with Congress in Odisha for Lok Sabha Polls and State Polls that are slated to be clubbed together.

The Congress-led alliance in the State will take on the ruling Bhartiya Janta Party in the upcoming Lok Sabha Polls 2019. The BJP in the state has forged an alliance with All Jharkhand Students’ Union (AJSU) and has offered a single Lok Sabha Seat.

In 2014 General Elections, Bhartiya Janta Party banking on ‘Modi Wave’ bagged 7 seats, while JMM and JVM settled for 2 Lok Sabha Seat each. While the remaining seats were bagged by Independent Candidates.

Mega Battle of Ballots is slated for April-May this year that would spread on Seven Phases starting from April 11 to May 19. Election Commission had on Sunday declared schedule for General Elections 2019.