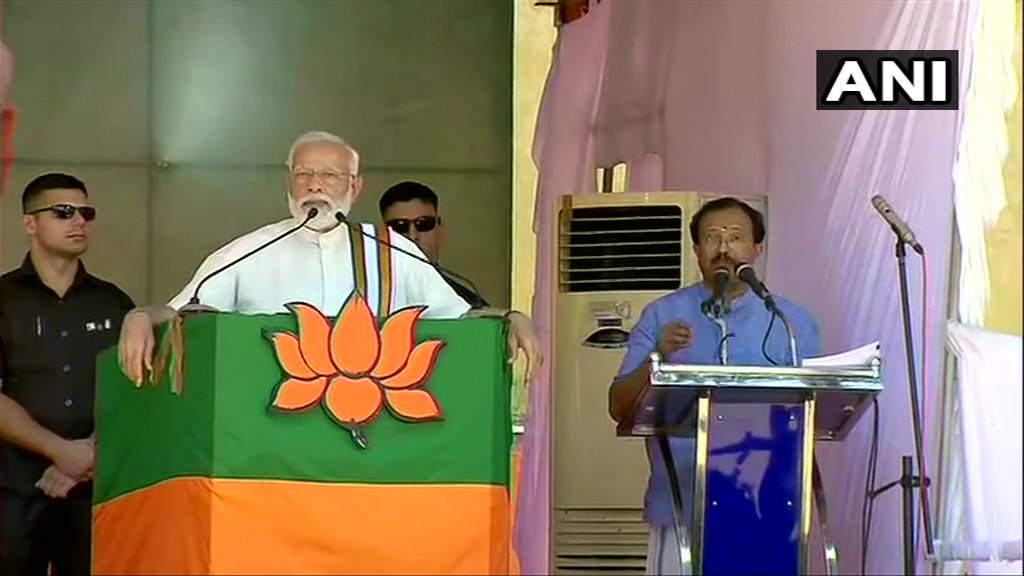 Speaking from the stage, PM Modi said, ‘Some Pundits think that BJP could not open its account in Kerala but Modi is going there to thank people. What is in his mind? But this is our culture, our thinking’.

PM Narendra Modi in Guruvayur, Kerala: Some Pundits think that BJP could not open its account in Kerala but Modi is going there to thank people. What is in his mind? But this is our culture, our thinking. pic.twitter.com/w3lFrJy6QZ

Bharatiya Janata Party believe that elections have a place of their own but after elections, the more important responsibility is towards all the citizens of India, PM Modi said while addressing party workers in Kerela.

He added, ‘Our Responsibility is towards the 130 crore citizens all Those who made us win our ours, those who did not make us win are also ours. Kerala is as much mine as is Varanasi’.

Praising his party workers, PM Modi said BJP workers in the ground not only work towards party and politics but also serve people 365 days in a year. We come in politics not to form a government but to work for the nation and we are here to build the nation.

PM Modi: BJP workers are on the ground not only for electoral politics but they serve people 365 days a yr. We have not come in politics only to form a govt but we are here to build the nation, we have come for the 'tapasya' to see that India gets its rightful place in the world. pic.twitter.com/jp9gX5r7Ci

He further said that People have elected their Jan Sevaks for 5 years. Hailing his Government at Centre and its flagship Ayushman Bharat Scheme, PM Modi said ‘Today I publicly request them to allow the residents of Kerala the benefits of Ayushman Bharat scheme’.

He further lauded his government at Centre and said his government has made a separate ministry for fishermen, cattle breeders to strengthen the rural & coastal economy.

PM Modi in Kerala: This time Govt of India has made a separate ministry for fishermen, cattle breeders to strengthen rural & coastal economy…We've also decided to run a vaccination drive across nation for animals, for years to come so that foot & mouth disease can be eliminated pic.twitter.com/JEA3vbPwiV

Prime Minister Narendra Modi will later proceed for his visit to the Maldives, a day after which is scheduled to visit Sri Lanka.

While, his visit to Kerela comes at a time when Congress President Rahul Gandhi is also on 3-day visit to the Wayanad, his Lok Sabha Constituency.

However, in Kerela, BJP drew a blank while Congress-led UDF bagged 19 seats out of 20 in the state.