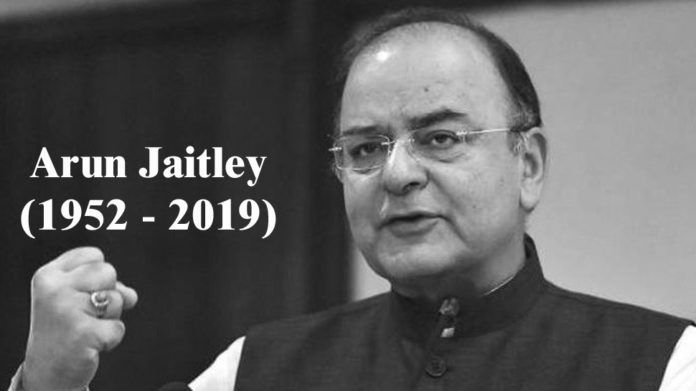 The tragic death of former Union Finance Minister Arun Jaitley has left his party and comrade leaders in tears. The whole nation is expressing its grief over the loss of such a brilliant leader. Messages of mourning and condolences have been coming over from every sphere of the leader who ever worked with him.

With the demise of Arun Jaitley Ji, I have lost a valued friend, whom I have had the honour of knowing for decades. His insight on issues and nuanced understanding of matters had very few parallels. He lived well, leaving us all with innumerable happy memories. We will miss him!

A stalwart who paid tribute to his simple beginnings by helping those with meagre means . Orator par excellence, legal luminary @arunjaitley ji served the Nation and sangathan with dedication and zeal. My tributes to him. Condolences to loved ones. Om Shanti.

Arun Jaitley aged 66, died today at AIIMS due to Cancer. He was admitted to the hospital on 9 August owing to the problem of “breathlessness”. The untimely death of the great leader had left the country stuck in emotions. Many prominent leaders have canceled their ongoing tour and are returning to Delhi to pay their last tributes to the leader.

Some state like Jharkhand also saw postponing of state programs in the honor of the late leader, Arun Jaitley.

President Ram Nath Kovind in a tweeted message also shared his grief over the incident. He wrote “Extremely saddened by the passing of Arun Jaitley after battling a long illness with fortitude and dignity. A brilliant lawyer, a seasoned parliamentarian, and a distinguished Minister, he contributed immensely to nation-building.”

Extremely saddened to learn of the demise of former Finance Minister #ArunJaitley ji. An inspiration & guide, we have lost a towering leader, whose contribution towards shaping the growth story of New India is unparalleled. My deepest condolences in this hour of grief. pic.twitter.com/UIdAKIsxex

Condolences have been coming over overseas also. French Ambassador extended his support to the family of Arun Jaitley.

French Ambassador to India Alexandre Ziegler: On behalf of France, I offer our heartfelt condolences to the family & loved ones of Arun Jaitley ji. France stands with India & its people in this time of deep grief. pic.twitter.com/pAJWlbwLQ2

Even opposition party leaders have come to share their wishes and condolences. Congress leader Shashi Tharoor took to the social media and shared his message in a tweeted post. 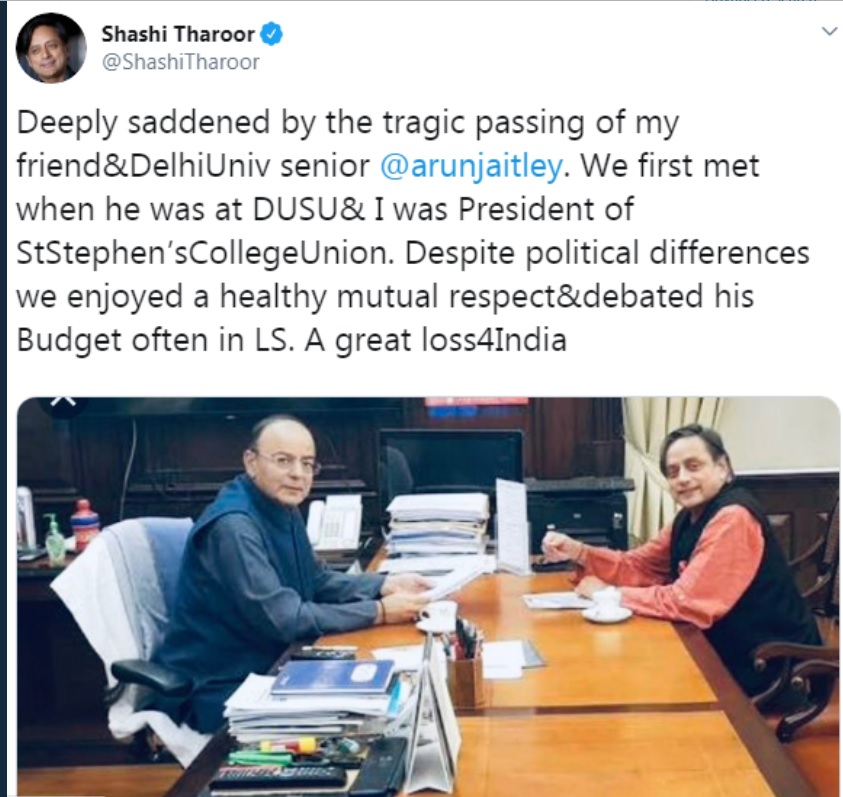 Former Prime Minister of India Manmohan Singh wrote a letter to Arun Jaitley’s wife extending his heartful message. He described him as a good administrator and a leader who always worked for the improvement of society. BJP leader Sudhanshu Mittal informed media about the cremation details of Arun Jaitley. He said that the leader’s body will be cremated at the Nigam Bodh Ghat on Sunday afternoon. As of now, Jaitley’s body will be taken to his Kailash Colony residence once formalities are completed at the hospital.

Delhi: Mortal remains of former Union Finance Minister Arun Jaitley being taken to his residence from All India Institutes of Medical Sciences, where he passed away, earlier today. pic.twitter.com/LBfXddIDSR