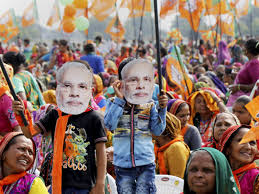 Gujarat Assembly Elections: Bhartiya Janta Party(BJP) is looking Confident of retaining most of its seats in Saurashtra and South Gujarat in the first phase of Gujarat elections held on Saturday,  and now looking to make significant gains in North Gujarat, especially Banaskantha that was affected by severe flooding in July.

The north region comprises 32 seats spanning six districts of Gandhinagar, Banaskantha, Sabarkantha, Aravalli, Mehsana and Patan. Congress had won 17 of these seats in 2012 while BJP won 15.

BJP is confident of increasing its share. A party leader pointed out that some of the sitting MLAs of Congress in north Gujarat have already defected to BJP. “Also, the absence of Congress MLAs in Banaskantha during flood work and the work put in by BJP government there — (chief minister) Vijay Rupani camped there for five days and ran administration from there — will help,” the person said on condition of anonymity.

The leader said some of the places were won by Congress with a margin of less than 1,000 votes. The party is also hopeful of a non-Patidar, non-Thakore OBC consolidation.

Also, the 38 seats in the central region will prove crucial for the two parties. Congress has traditionally dominated tribal and rural areas while BJP has had an edge in urban pockets, especially Vadodara city. Sources in the BJP camp said the party was sure of getting more than 60 seats in the first phase when 89 constituencies voted.

“Saurashtra was in some ways a challenge,” a BJP leader said. “But split in Patidar vote and consolidation of other communities has worked in our favour. So the tally of the party cannot go below 60 seats at any cost,” the person said. In 2012, BJP had won 63 of the 89 constituencies while Congress won 22.

A BJP leader said not much can be read into the reduction in polling numbers as even “the 10% spike had not made much of a difference to BJP’s vote bank last time”.

Meantime, Congress said it expects to win 40-45 seats in the first phase, showing significant gains from last time. “Our reports say that Koli and Mer voters of BJP have stayed away while places such as Morbi with significant Kadwa Patel electorate have voted in huge numbers,” a Congress leader said. Among the places that went to polls on Saturday included Surat where the Congress leaders say the party would make a dent owing to agitation by the Patel community and the negative impact the introduction of GST had on textile traders.

Both BJP and Congress claimed to have an edge over the other at the end of the day. “The kind of analysis and information that we are receiving, BJP is slated for a big win,” a party leader said. “Reports from prachar pramukhs have been obtained and party president Amit Shah has gone through the numbers himself. This kind of grassroots feedback cannot go wrong,” the leader said.