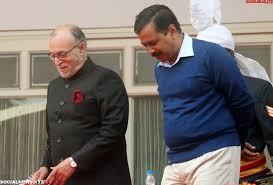 An uncommon support came for Delhi Chief Minister Arvind Kejriwal from the opposition parties in the Rajya Sabha on Thursday. The support came amid the ongoing tussle between Kejriwal and Delhi Lieutenant-Governor (LG) Anil Baijal.

The time since he came to the power in Delhi, Kejriwal has been claiming that the LG doesn’t let him exercise the power he deserves after becoming an elected chief minister. His government has even fought out this issue in the court, but without much success until now.

The latest ‘apple of discord’ between Kejriwal and Delhi LG is over the home delivery of services scheme planned by the Delhi government. The LG has stalled the scheme. Not just with Baijal, Kejriwal also had an acrimonious relationship with ex-LG Najeeb Jung.

Delhi government had called him an agent of the Centre deliberately not letting the AAP government carry out governance tasks in Delhi.

Agarwal’s support for Kejriwal came during the debate on regularising unauthorised colonies in the national capital. From the Centre’s side, Union minister Vijay Goel alleged that the Delhi government was failing to act against illegal colonies. He even urged the Centre to dismiss the Delhi government.

However, Agarwal countered Goel, saying the BJP-ruled three municipal corporations of Delhi have the mandate to check unauthorised constructions.

Veteran Samajwadi Party leader Ram Gopal Yadav also raised the issue of the Delhi Chief Minister not being invited at the inauguration of the Delhi Metro`s Magenta line a few days back.

“Every person with common sense was heard saying that this (not extending invitation) was not proper,” Yadav said as he cited an example of former Prime Minister Atal Bihari Vajpayee once declining to go to the inauguration of a project in a state until its Chief Minister was invited.

As many leaders demanded an end to the tussle between LG and the CM, Rajya Sabha deputy chairman PJ Kurien asked Union Urban Development Minister Hardeep Singh Puri, to take some steps in this regard. Puri promised he would try to negotiate peace between LG and the CM. However, he pointed out that it won’t be an easy task.

“In the four decades of my public life, I faced many challenges. I have tried to negotiate with terrorists, etc. This (dealing with Kejriwal) is going to be a difficult one but I will accept your challenge and try and negotiate,” Puri told the Rajya Sabha.

“Maybe, I invite both of them for a lunch or something and will try and sort this out,” he added after Deputy Chairman P.J. Kurien asked Puri to “sort out the friction between Lt Governor and Delhi Chief Minister”.