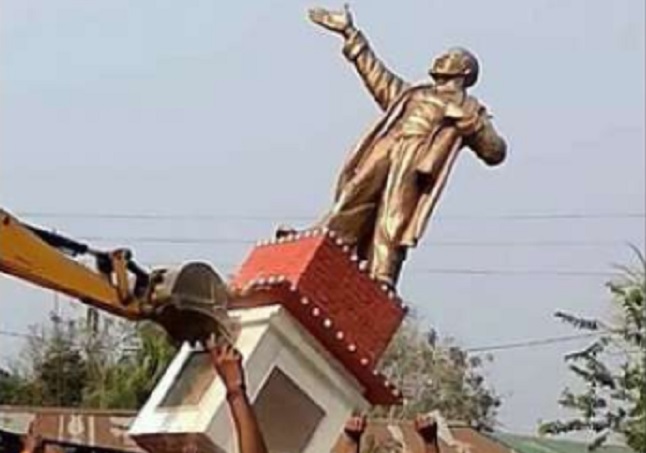 Less than two days after the Bharatiya Janata Party stormed to power in the Communist bastion of Tripura, several jubilant party supporters celebrated by bringing down a statue of erstwhile Russian revolutionist Lenin in Belonia town.

The statue, installed by Tripura’s then CPI-M government five years ago, was razed to the ground by a mob allegedly comprising of BJP workers and supporters using a JCB vehicle amidst loud chants of “Bharat Mata ki Jai!”

BJP national general secretary Ram Madhav, who had played a crucial role in the party’s election fortunes in Tripura, Nagaland and Meghalaya, shared a video of Lenin’s statue being demolished on Twitter by saying, “People taking down Lenin’s statue … not in Russia; it is in Tripura. Chalo Paltai.” Madhav later deleted his tweet a few minutes after posting it.

State police has claimed that many such instances have occurred in Tripura since election results were announced last week. Authorities even had to impose partial curfews under Section 144 of CrPC at some places to maintain law and order.

Communist outfits charged BJP supporters of targeting them and their offices with violent backlash following the saffron party’s massive victory in assembly polls. BJP, on the other hand, said these instances only indicate peoples’ anger towards Left parties for the kind of bad governance they have delivered for the past two decades.

You can reach out to us at theindianwi[email protected] and we will get back in minutes.