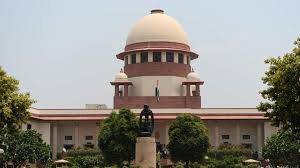 A vacation bench comprising Justice Indira Banerjee and Justice Sanjiv Khanna said in their order that, “subject Priyanka Sharma attending an apology in writing for putting open objectionable picture of West Bengal chief minister on Facebook account shall be immediately released. At the time of release, she shall tender and policy in writing.”

In order, the Apex court also issued a notice to West Bengal police over the way in which Priyanka Sharma was taken into custody.

Priyanka Sharma the convenor of the Bharatiya Janata Party youth wing in Howrah posted a picture of actor Priyanka Chopra at the recent metropolitan museum in New York with Mamta Banerjee’s face allegedly superimposed on the actor’s face on May 9.

She has been charged under section 500 of the Indian Penal Code, section 66 A, and the non-bailable 67 A of the Information Technology Act

The family members of Priyanka Sharma alleged that she was arrested at the behest of TMC’s because she was working for the BJP.

While talking to an ANI, Sharma’s mother said that “my daughter was arrested because she was working for Bharatiya Janata Party. This is the first time that she is far away from us and if she had been a TMC worker, nothing bad would happen to her. The act has been done at the behest of TMC.”

Union Minister Mahesh Sharma attack the West Bengal government for the arrest of BJP activist and said that West Bengal is indulging in politics of hate and violence. He said that so often the workers have called Narendra Modi a liar and chor but no action was taken against them because BJP believes in open debate and discussion. “But TMC workers are threatening and indulging in politics of hate and violence and this is not good for a country or a state,” he added.

West Bengal has witnessed six days of polling from April 11 to 12 VII on the last stage of polling will be held on May 19 results for 17th Lok Sabha election should be announced on May 23.