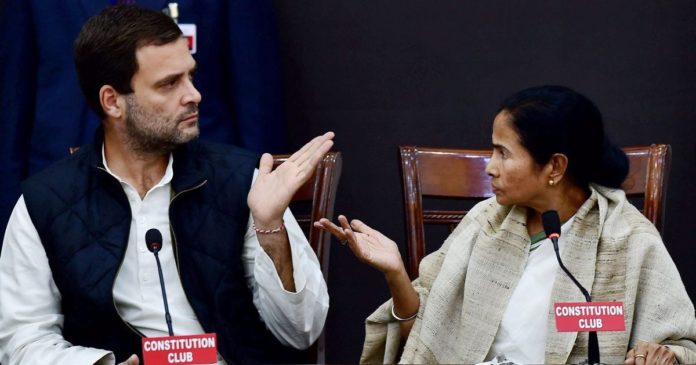 Giving Bharatiya Janata Party (BJP) the benefit of a fight between the opposition, West Bengal Chief Minister hailed out at the Congress leader for taking the help of RSS, the BJP’s ideological mentor. The Chief Minister Mamata Banerjee accused the grand old party of Gandhi family on Wednesday saying that the opposition is contesting with the support of RSS on two seats in Bengal, Adhir Ranjan Chowdhury, and Abhijit Mukherjee.

Rahul Gandhi, the Congress president hinted back at the West Bengal chief minister considering her on and off relation with the BJP saying, “has Mamata ever compromised with the BJP anywhere?” In his remarks against Mamata, Mr. Gandhi said, “Congress has never compromised with BJP. Mamata Banerjee says she is not fighting against BJP. If not, then who raised the Rafale issue, the ‘Chowkidar chor hai’ slogan.”

Addressing a rally in Darjeeling, Mamata Banerjee told the people to cast their votes against BJP an Congress as both of the parties are in hand and gloves with each other. She said that according to the sources, “the Congress leader in Behrampur is fighting with the support of RSS, Pranab Mukherjee’s son is fighting with the help of RSS, except all this even in Darjeeling, Congress is getting support from RSS.”

Mamata Banerjee has been the minister of railways and coal mines portfolios in the NDA governments led by Atal Bihari Vajpayee. She started her career in the Congress, formed her party in 1997 and two years later joined Congress. In 2004 after Congress came to power, Mamata Banerjee developed a rapport with Sonia Gandhi.

Addressing a rally in Karandighi under Bengal’s Raiganj Lok Sabha constituency, The Congress president lashed out at Mamata Banerjee and her government TMC for failing to create any employment opportunities in the state.