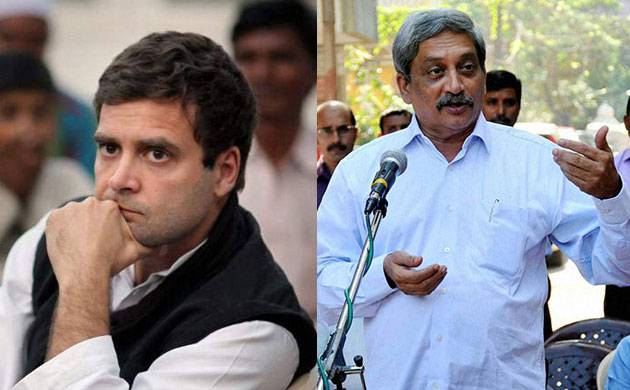 Congress President Rahul Gandhi on Tuesday (January 29) while addressing a Public rally in Cochin said that the Goa Chief Minister and the Former Defence Minister Manohar Parrikar told him that he had nothing to do with the “new deal” on Rafale jets. Attacking PM Narendra Modi, Gandhi alleged that the new deal on the acquisition of the fighter jets was “orchestrated” by the Prime Minister in order to “benefit” businessman Anil Ambani.

Gandhi, reportedly said, ‘Friends, the ex-defence minister Mr Parrikar clearly stated that he has nothing to do with the new deal that was orchestrated by Mr Narendra Modi to benefit Anil Ambani‘.

Congress President Rahul Gandhi in Kochi, Kerala earlier today: Friends, the ex-defence minister Mr Parrikar clearly stated that he has nothing to do with the new deal that was orchestrated by Mr Narendra Modi to benefit Anil Ambani. pic.twitter.com/QSaVIokt0j

His comments came hours after Rahul Gandhi walked into the office of ailing Goa CM Parrikar on Tuesday. Gandhi had later stated that it was meant to be a “personal visit” to the Goa Chief Minister.

He tweeted on Monday, ’30 days since the Goa Audio Tapes on RAFALE were released. No FIR or enquiry ordered. No action against the Minister either! It’s obvious that the tapes are authentic & that Goa CM, Parrikar, is in possession of explosive RAFALE secrets, that give him power over the PM” said Rahul Gandhi while quoting a tweet of News Agency ANI over ‘Goa Audio Tapes’

While asserting that Tapes were authentic, He said, No FIR or the Investigation has been initiated against the Minister while referring to CM Parrikar.

Earlier this month on January 2, Congress had released an audio clip of Goa Health Minister Vishwajit Pratapsingh Rane claiming Chief Minister Manohar Parrikar has “All the files related to #RafaleDeal in his bedroom”.