After lunch, Congress members shouted slogans against the government and some of the treasury benches members too shouted counter-slogans because of which Rajya Sabha was adjourned for the day. Deputy Chairman P.J. Kurien.

Deputy Chairman P.J. Kurien said that he was unable to conduct the session as both the sides were shouting slogans and the chair was helpless. He had no other option other than adjourning the Rajya Sabha for the day.

At 2 pm, Congress member Pramod Tiwari raised a Point of Order and objected to the Centre sending paramilitary forces to Bengaluru along with Income Tax officials. As India has a federal structure, Centre cannot send its paramilitary troops without the consent of the state or without the state government demanding it. All the Congress leaders trooped to the podium and starting shouting “stop killing the democracy”. That time the house was adjourned for 15 minutes. But as soon as the house began, Congress leaders started shouting again. Then again the house was adjourned for next 10 minutes. When the House reconvened, Congress members Pramod Tiwari and Anand Sharma again raised the issue of paramilitary forces accompanying I-T officials as they raided Karnataka Minister D.K. Shivakumar.

The government did not deny the opposition’s allegations. Minister of State for Parliamentary Affairs Mukhtar Abbas Naqvi said the “fight against corruption will not stop no matter how much they shout.

After this, both sides started shouting and the Rajya Sabha was adjourned. 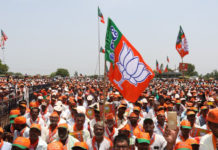 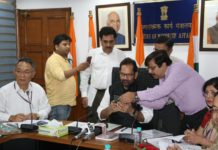 BJP to organize 10 big meetings of senior leaders under ‘Jan Jagran Abhiyan’; aims to aware people about repeal of Article 370