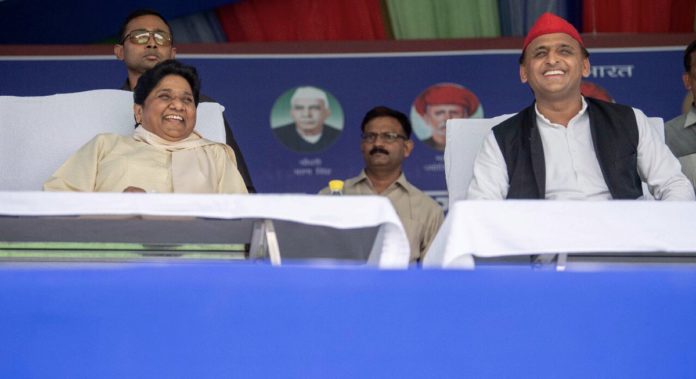 Rashtriya Lok Dal (RLD) Chief Ajit Singh will also be present in the joint rally slated for afternoon. While earlier in the day BSP-SP-RLD will also hold a joint rally in Jaunpur district of the State.

BSP-SP-RLD Chiefs had in a run-up to the national elections held several joint rallies including one in Mainpuri where BSP Supremo Mayawati seeks votes for Samajwadi Party Patriarch Mulayam Singh Yadav.

Mahagathbandhan is also expected to hold joint rallies in Azamgarh on 8 May, Gorakhpur on 13 May and Varanasi on 16 May respectively.

Samajwadi Party (SP) and BSP have been in an alliance in the state with BSP have got 37 seats while SP been offered 37 seats to fight on. However, The SP-BSP Alliance have not named its candidates Congress Bastions – Amethi and Rae Bareli. RLD gets 3 Lok Sabha seat in the alliance, Ajit Singh led party has named its candidates on Mathura, Muzaffarnagar and Baghpat – where polling held in phase-I on April 11.

Voting for the remaining 27 constituencies of the state will be held in final two phases slated on May 12 and May 19.