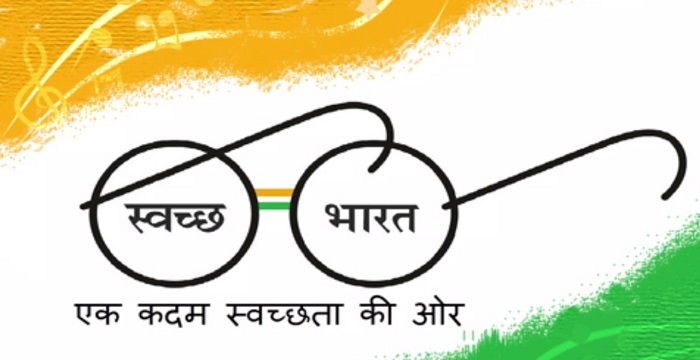 Swachh Bharat Mission was launched by Prime Minister Narendra Modi on 2 October 2014. The mission aims to achieve universal sanitation coverage and to encourage hygienic sanitation practice. The scheme is also known as the “Clean India Mission”. The project was launched as a tribute to Mahatma Gandhi. It is a nation-wide campaign aiming to clean up the streets, roads, cities and rural areas. The mission aims to achieve an “open-defecation free” (ODF) India by 2nd October 2019.

Information about Swachh Bharat can be accessed from the link, Official site.

Ramesh Jigajinagi (Minister of State) is the Minister of Drinking, Water and Sanitation. But from May 2019, the ministry has been merged with the Ministry of Jal Shakti.

Ministry of Housing and Urban Affairs which is overlooking the Swachh Bharat Abhiyan (Urban) currently works under the charge of Hardeep Singh Puri. He took the charge from Venkaiah Naidu who forfeited the post of Union Minister on his election to the post of Vice-president.

India began its journey of cleanliness with the efforts of Mahatma Gandhi. The Father of our nation initiated a massive awareness program on hygiene and sanitation which inspired many more leaders to follow his footsteps. In 2014, Prime Minister Narendra Modi launched a nation-wide campaign in the form of Swachh Bharat Abhiyan to achieve the dream of Clean India as a tribute to Mahatma Gandhi on his 10th birth anniversary.

The mission’s logo was selected through a competition that saw the participation of thousands of participants. Out of it, Shri Anant Khasbardar of Kolhapur from Maharashtra won the first prize. He designed the simple yet most meaningful logo for the campaign. His logo consists of spectacles of Mahatma Gandhi with ‘Swachh Bharat’ written on the two glasses with National Tricolour in the background. The logo is a tribute to Gandhiji’s ideals and the fact that the whole nation is working towards his cause.

The tagline competition was won by Ms.Bhagyasri Sheth of Rajkot from Gujarat who gave the beautiful wordings of “Ek Kadam Swachhata Ki Aur”.

The scheme aims to ensure three-fold objectives within its scope. First of all, it envisages reducing the number of households engaging in the practice of open defecation. The second objective is to convert pit latrines into sanitary latrines. The third objective of the Clean India Mission is to halt the construction of any new unsanitary toilets.

Secretary of Ministry of Drinking Water and Sanitation is the Mission Coordinator for SBM.

Earlier, a sanitation program was launched in 1954. This was the first such program of the nation. It was followed by the launch of the Central Rural Sanitation Programme in 1986. Then the strategic revamp of the scheme led to the development of the Total Sanitation Campaign (TSC) in 1999, which transformed later into the Nirmal Bharat Abhiyan in 2012.

The scheme is covered by multi-sectoral funding pattern which includes-

An incentive of Rs. 12,000 is provided to the eligible beneficiaries in rural areas for the construction of Individual Household Latrines. It also covers the provision of water storage.

The funding for constructing toilets will also be met by 3 primary sources – Ministry of Drinking Water & Sanitation, Ministry of Rural Development, and the States. The funding ratio will be 75:25 between center and State for the normal states while for the North Eastern state, it will be 90:10.

The program uses a multi-dimensional approach to achieve the goals of sanitation and hygiene.

Even though the Ministry of Drinking Water and Sanitation (now merged in Ministry of Jal Shakti) is the nodal agency of the scheme, but the program also entails the active participation of other stakeholders such as local NGOs, civil societies, corporates, faith organizations, media, and others.

Prime Minister Modi had given a call for making the SBM program a community-driven program that focuses on involving all the stakeholders of society. 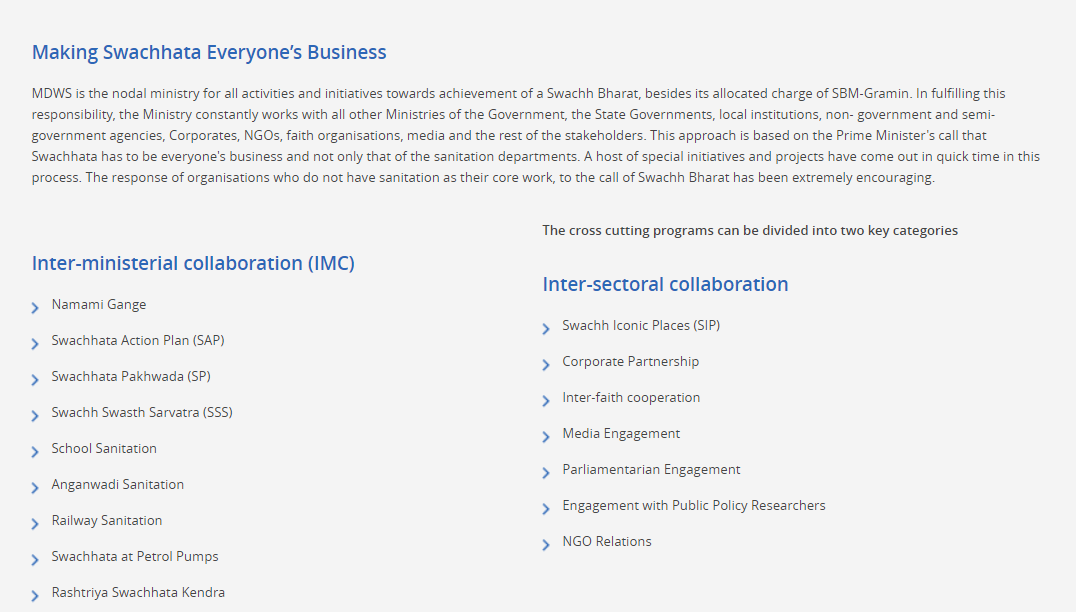 Under the scheme, volunteers, known as Swachhagrahis, or “Ambassadors of cleanliness“, have been tasked to encourage indoor plumbing. Non-governmental organizations such as The Ugly Indian, Waste Warriors are also part of this campaign. Community approaches to sanitation facilities are also being adopted at the village level.

To provide a 360-degree approach to the performance evaluation process of this scheme, the Swachh Bharat Mission (SBM) Mobile app was developed by the Ministry of Drinking Water & Sanitation in technical collaboration with NIC. An individual can upload photographs of beneficiaries receiving toilet facilities in their homes.

The amazing feature of this scheme is that it automatically captures the latitude and longitude of the location as well as the date when photographed. The data then gets uploaded on the central server of the Mission located at the National Data Centre. This saves the hassle of manual uploading of data to the server.

Swachh Survekshan is an annual survey of cleanliness and sanitation in cities and towns conducted across India. The Survekshan was launched under the Swachh Bharat Abhiyan. The survey was carried out by the Quality Council of India.  The first survey was undertaken in 2016 and covered 73 cities. But the latest Swachh Survekshan 2019 covered 4,237 cities in a record time of 28 days.

The government has also come out with ODF+ and ODF++ status to declare a location’s sanitation standard. To know more about the detailed explanation, access the official PDF here.

The use of technology in the scheme has also been reported to the geo-tagging of toilets. This ensures that the scheme is functional always-on real-time information.

India’s drive towards cleanliness has been one of the largest such campaigns in the world that not only focuses on promoting sanitation but also engaging citizens as active participants.

The healthy target of eliminating open defecation has been a very targeted approach under this scheme. The focus of the program has been emphasized more on the outcomes rather than the quantifiable outcomes.

And finally, with the success of this scheme, it has been made clear that the scheme has been truly a game-changer in the arena of sanitation and hygiene.