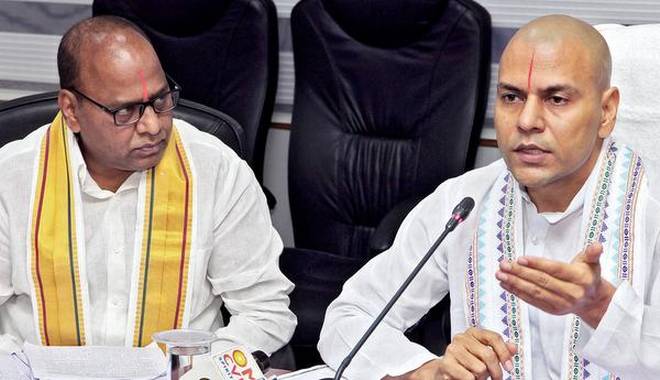 Anil Kumar Singhal, Executive officer of Tirumala Tirupati Devasthanam, on Tuesday, responded to the issue of seizure of 1381 kgs of gold by Election Commission officials.

Tirumala Thirupati Devasthanam‘s Executive officer, Anil Kumar Singhal responded to the seizure of 1381 kgs of gold by the Election Commission saying Punjab National bank had returned the gold they had deposited with the bank as the three year term had reached its maturity.

This is after the Andhra Pradesh government had orderd a probe into the lapses regarding the transportation of gold seized by Punjab National Bank (PNB). The gold was seized on April 17 by the flying squad of the Election Commission.

TTD’s Anil Kumar Singhal responded to the I-T deparment’s demand of sending an official to deal with the investigation saying it was the duty of the PNB to return the asset back to the TTD on April 18. He said, “It is the TTD’s gold when it reaches the treasury. how do we know how much gold the truck was carrying and what was its transportation route?”

He said that under the scheme the TTD had to pay one per cent commission and 1.5 per cent handling charges to the bank which included transportation, storage, gold purity testing, and other costs. The TTD mentioned about its gold deposits with various banks. The TTD had 5,387 kgs of gold deposited with State Bank of India and 1,938 with Indian Overseas Bank.