Twitter is a social networking platform that allows users to follow anyone they like and receive updates from them whenever that person posts a tweet. One of the best things about Twitter is that it allows you to unfollow anyone whenever you want to and that too without them knowing about it. But now an internal bug is causing Twitter into sending notifications to the people you unfollowed, just to let them know you’re no longer viewing their tweets.

The notifications says the user has “followed them back” when in fact the opposite is true.

“I unfollowed someone and it sent them a notification that I had followed them, which alerted them to the fact that I had actually unfollowed them,” said VICE staff writer Marie Solis. “Then they unfollowed me and the same thing happened, and then I got subtweeted by a person with more than 10,000 followers.” 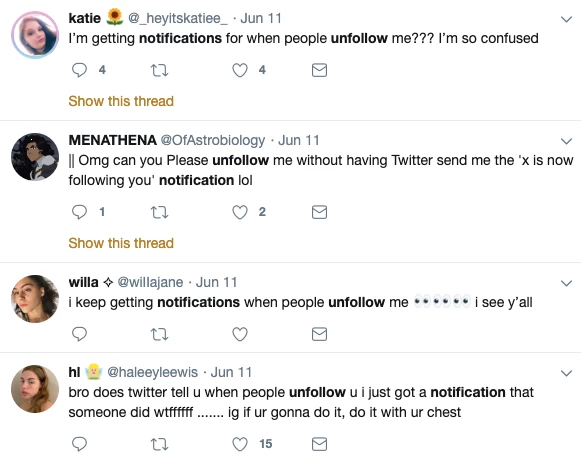 It’s important to note that even if you mute the user, they’ll still be able to view your content and if you don’t want the user to see your posts, you must use the “block” feature, which blocks the user of seeing any of your content. The user won’t receive a notification that you’ve blocked them, but they’ll be informed that if they try to visit your personal Twitter page. This will also impact their ability to send you a direct message, while the mute feature does not interfere with direct message communication.

It also means that if you’ve received notifications regarding new people following you this week, they might have actually unfollowed you. But the issue is only happening to some users, not all.

However, the good news is that this bug isn’t affecting everyone, and the notifications seem to only surface between Twitter users who follow each other. Twitter has also claimed that they’re working on a fix for this faulty notification system and will soon fix it, in a comment to Vice.