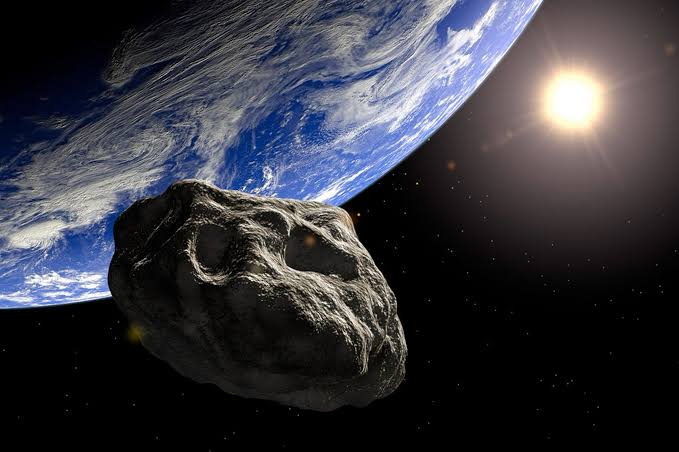 Future always excites us humans.
We have been inquisitive of what lies ahead of us.

On March 21 2021, the largest as well as one the fastest moving asteroid of the year has been predicted to pass alongside Earth at its closest.
It has been named officially as 2001 FO32 by NASA.

Are we at risk?

With a distance not closer than 2 million km to Earth equivalent to 5¼ times the distance from Earth to the Moon, it’s a big miss now for the Planet as well as in future.

But it indeed will be a big hit for our Scientists as it will present a valuable scientific opportunity for astronomers to get a good look at a rocky relic that belongs to the very birth of our Solar System.

But this is close enough for NASA to classify it as “potentially hazardous” under the near-Earth asteroids.

NEO(Near Earth Objects) is designated to an asteroid when they come within about 4.65 million miles of Earth, and are larger than 500 feet in diameter.

It has been established that more than 95% of near-Earth asteroids have been detected, tracked and tackled.
None of these as well as majority of those remaining untracked, seems to be seizing the chance of contacting Earth over the next century.

The incoming guest will travel at an unusually fast speed of 77,000 mph or 21 miles per second when it makes its close approach towards the Earth.

This character is due to its highly inclined and elongated orbit around the sun.

Driven by its orbit, the asteroid will be as close as Mercury to the Sun and as far as Mars.

According to NASA, “As 2001 FO32 makes its inner solar system journey, the asteroid picks up speed like a skateboarder rolling down a halfpipe, and then slows after being flung back out into deep space and swinging back toward the Sun”.

“This is the closest predicted approach in 2021 for any moderately large asteroid, where ‘moderately large’ means at least several hundred meters in size”.

After the asteroid makes its inner solar system journey, it will pickup abnormal speed before plunging back into deep space and swinging toward the Sun.

It will take an absolute 810 days (about 2¼ years) for it to complete encircling an orbit.

2001 FO32 will then continue with its itinerary alone, not coming this close to Earth again until 2052, having passed by at about seven lunar distances or 2.8 million km.

What surprises the guest may hold for us?

According to the NEOWISE team, following will be looked at with the aid of this Asteroid:

1. Comprehensive understanding of the asteroid’s size and composition.

Like any matter absorbs or reflects sunlight on Insolation, the rocky material of asteroid also does the same, depending on different wavelengths.

3. This can help indicate and measure the chemical “fingerprints” on its surface.

4. To perform the future risk assessment from such reception.

Every resource on Earth and the Universe has a story to tell. Everything holds a mystery to it.

We can endeavour to unravel it as soon as an opportunity comes at our door and the Universe may begin to conspire in our favour.