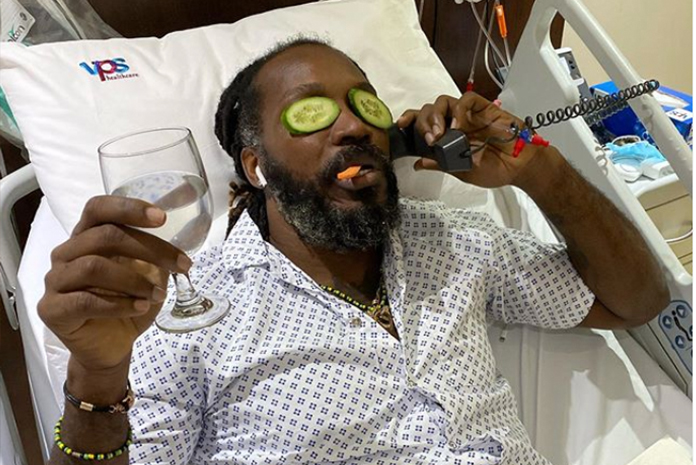 The opening batsman of the men in red Kings XI Punjab Chris Gayle was reportedly admitted for stomach infection. However, it is now clear that the mighty powerhouse player is fine to be back with the team.

The Caribbean will be available to take on the Royal Challengers Bangalore on 15th of October in Sharjah.

The official website of KXIP has expressed their excitement and happiness as their star batsman have made a return and will be seen on the training ground.

The man from West indies missed the match against Sunrisers and Knight Riders due to the bug in his stomach.

The situation asked the player to be admitted but now Gayle is completely fine. Chris Gayle has started to train with the team as well.

The Universe Boss Chris Gayle was expected to play against the Sunrisers Hyderabad if he had not been in trouble with his stomach as said by the head coach Anil Kumble.

The Caribbean was not available for the match against KKR as well. But soon after the sport, he posted a video from a room.

However, later the Universe Boss took the matter in his own hands and posted a video on Instagram claiming that the struggle is real.

On the other hand, there were a lot of questions on whether Gayle will be getting a chance against the Sunrisers. Kumble clearly revealed it in front of the broadcaster in Dubai that Gayle was in his part of the plan against SRH.

Kumble assured the fans that Gayle would’ve played against SRH but the gastrointestinal disorder has troubled the decision.

The journey so far of KXIP has not been a good one as they find it difficult to find the perfect 11 for their side and now they stand in the bottom of the points table with only 2 points to their name.