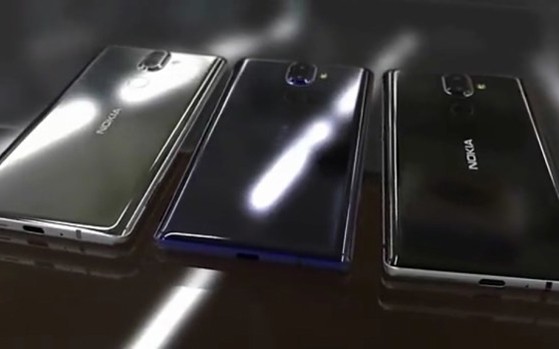 Here are the insights on the Nokia's upcoming flagship smartphones, the Nokia 8 (2018) and the Nokia 9 with dual camera setup.

With respect to design and build quality, the smartphone maker has chosen glass metal sandwich design instead of the metal unibody. This means, the good old wireless charging is making a return, so, we can also expect new “fat boy” accessories. These two devices do have their fingerprint scanner placed on the back, which is becoming an industry standard. The rear-facing fingerprint scanner does give the clue for the bezel-less front display with probably an 18:9 aspect ratio screen. The only difference between these devices will be the screen size. The Nokia 8 is expected to feature a 5.7-inch screen and the Nokia 9 will feature a bigger 6.0-inch screen with Corning Gorilla Glass lamination.

More on to the display, the Nokia 8 and Nokia 9 are likely to replace the IPS LCD panel by an OLED panel with that good old 2K QHD+ resolution. The OLED display does not only offer better colour reproduction, but it goes light on the battery as well. So, the company is most likely to switch from the same.

Leaving the display, the more than a million pixels on the display will be driven by the Qualcomm’s flagship offering, the Snapdragon 835 Octa-core SoC. This chip is very potent, however, as we are talking about the 2018 class smartphone and in just a few days Qualcomm is announcing the successor of the same. This phone might have a similar fate that of the LG G6. This powerhouse will be paired with either 4 GB or 6 GB LPDDR4x RAM and 64 GB or 128 GB onboard flash storage with a dedicated micro SD card slot.

The Nokia 8 already had a dual rear-facing camera setup (RGB + monochrome). However, this time around, the company is taking the camera to the next level, according to industry insiders, the company is implementing a camera setup similar to that of the iPhone X. These smartphones will offer a dual-camera setup with X2 optical zooming, bokeh effect photography with 4K video recording capability.

Other standard flagship features like NFC, IP rating for water and dust resistance, and USB type C will also be offered. However, we also like you share the information that, these smartphones might ditch the 3.5 mm headphone jack, in favour of the lossless audio via 3.5 mm headphone jack.