The Indian Wire » Travel » Life… In a Metro 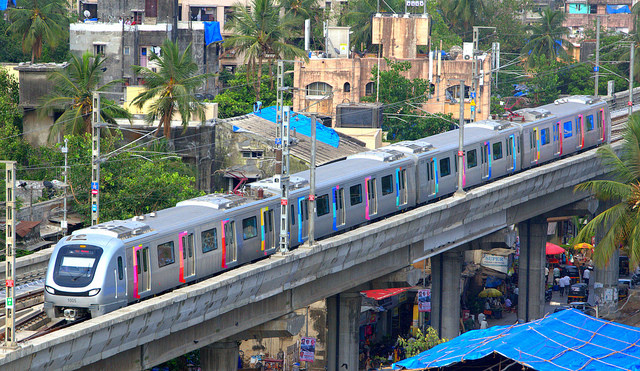 Now, only if we already had trains almost flying in the air. Only if we did not have to sustain that traffic snarled commute to-and-fro from office. Only if a 100 minute journey could be travelled in less than 20 minutes. Bindiya Chotrani talks about flying trains and more. Well not literally, but almost.

Now, only if we already had trains almost flying in the air. Only if we did not have to sustain that traffic snarled commute to-and-fro from office. Only if a 100 minute journey could be travelled in less than 20 minutes.

Bindiya Chotrani talks about flying trains and more. Well not literally, but almost.

And after a full 8 years, MMOPL (Mumbai Metro One private Ltd) finally manages to pull off this one off, not flawlessly though we say. With chief minister Prithviraj Chavan flagging off the first service on the 8th  of July, 2014, we had the Mumbai Metro in operations.

Taking anywhere between 90 minutes to 120 minutes and having to cross 45+ signals, the metros have helped reduce the journey to a mere 20 minutes. With 10 rupees being the promotional fare for the first 30 days, irrespective of the distance traveled, the fares are to be modified soon. Now, while the MMOPL plans to fix upon a minimum fare of Rs. 10 and a maximum of Rs. 40 for a one way journey, citing cost escalation in the three-phase project, the government has notified that the Metro fares are required to fall only within Rs. 9 and RS. 13

Now now, we aren’t going to be surprised, when we hear that the Mumbai Metro project has made it to the world’s slowest project records. Afterall, the project took until 2014 to complete against an estimated 2010, while the costs increased from an estimated 2356 crores to a whopping 4321 crores. But, the MMOPL definitely deserved to be lauded – with escalators only coming into advent at the railway stations recently, the metro will consider usage of 95 escalators, 45 elevators and also wheelchairs for the disabled.

MMOPL will operate 200-250 services a day, carrying around 11 lakh passengers, every coach carrying 375 passengers, while the entire train transports 1,500 commuters.

Thankfully though, the tiff between MMOPL and the government gave way to the name ‘Mumbai Metro’ and not ‘Reliance Metro’ for it. And with it coming into operation, people sure are wanting to experience it and know more about it. Considering this, MMOPL has FAQs, a Facebook page, a twitter handle and a blog dedicated tot it too. Well, this time instead of the silver lining to the cloud, there’s cloud to this silver lining. The government has listed down offences and penalties for all those punters planning to act adventurous with the metro just like they did with the railways.

Well, have the metros been worth the 8-year wait. Well, yes and no, with the 120 minute traffic-snarled journey being reduced to that of 20 minutes, the metro is a boon for office commuters. But then if Mumbai takes one step towards building an identity, it takes two steps behind. Less than a month after starting it’s operations, the city’s newest mass transit – much lauded and then criticized for the inappropriate fare hike, recently faced flak after one of the compartments in a Ghatkopar-bound metro witnessed it’s inaugural leakage.

All of this, while people on Twitter had a field day as they took potshots at Mumbai Metro’s ‘personal shower service’. Here are some of the best tweets:

Have traveled by the metro? Planning to do it anytime soon? Have that SELFIE in the metro? Let us in on it and more!

Most popular spots in Mumbai for Street-Shopping
Jayanagar Complex is the ultimate shopping destination!