The New Year of 2018 began with a resounding tweet of US President, Donald Trump, saying, “Washington had ‘foolishly’ provided Pakistan $33 billion in 15 years to fight terror, but they have given us nothing but lies & deceit, thinking of our leaders as fools.” Here it is being labeled a “resounding tweet” because its impact is resonating till date in Pakistan. In the recent turn of events, a bill has been introduced in the US House of Representatives to end all non-defense aid to Pakistan as Islamabad “provides military aid and intelligence” to terrorists. The bill sought that the entire amount be redirect to infrastructure projects in the United States. 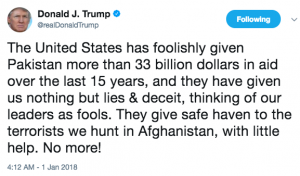 What made Pakistan a foe to US?

The lawmakers highlighted that Pakistan “knowingly” and repeatedly provides resources and safe havens to terrorists and terror organisations. Slamming Pakistan, Congressmen Mark Sanford from South Carolina added  that the United States should not funnel money to a government that “provides military aid and intelligence to terrorists”. Sanford,  said, “When the American people support other nations, our generosity shouldn’t be used to reward terrorists with US taxpayer dollars. Couple this with the fact that the Highway Trust Fund will be $111 billion short by 2026, and it simply makes financial sense to re-purpose these funds for our infrastructure.”

US VP Mike Pence said in Kabul recently the Trump administration had put Pakistan on notice. Pakistan has refused to give the US access to one of the abductors of a Canadian-American family freed early this year, further straining the ties between Islamabad and Washington. Senator Rand Paul, who introduced the companion legislation in the Senate, said we fail to protect the country and steward taxpayers’ hard-earned money when we support countries that chant “death to America and burn our flag”. “Let’s bring that money home and use it to help rebuild our infrastructure instead of giving it to a nation that persecutes Christians and imprisons people such as the doctor that helped us get Osama bin Laden,” he said.
The United States, post 9/11, has provided nearly $34 billion in aid to Pakistan, including $526 million in 2017 alone.

North Korea’s nuclear attack to US is a recent possibility : US envoy
UK: Long term students and employees to pay double health surcharge to support NHS