CFMoto is slowly reintroducing its lineup with BS6 updates in India. Earlier, the Chinese bike manufacturer introduced CFMoto 650GT, 650MT and 650NK here. However, it is time for the CFMoto 300NK to roll out in the Indian market with a price tag of Rs.2.29 Lakhs (ex-showroom).

Interestingly, with an identical price tag when compared to the outgoing BS4 counterpart, the bike remains exactly similar as before. Meanwhile, take a look at what all has changed on the all-new CFMoto 300NK.

In terms of design, CFMoto 300NK looks similar to the outgoing variant. It still features the muscular fuel tank, LED headlamp with DRL, split seats and high tail section. Also, the company has also introduced a new colorful all-digital TFT display that shows almost every piece of information required by the rider. Further, there are two different ride modes on offer including – Rain and Sport.

Based on the steel trellis frame, the all-new CFMoto 300NK still comes equipped with a pair of USD forks at the front. Meanwhile, at the rear, it still features a monoshock setup. Apart from this, the updated bike comes with disc brakes on both ends alongside dual-channel ABS for enhanced safety.

Coming to the major update, the engine of the 2021 CFMoto 300NK is now a BS6 compliant 292.4cc single-cylinder liquid-cooled motor. Although, CFMoto has not revealed the updated power figures yet. Here are the old power figures just for reference – 34HP @ 7,200 RPM and 20.5Nm @ 8,800 RPM. Further, this engine comes mated to a 6-speed gearbox.

In India, the all-new CFMoto 300NK will directly go head-on against the BMW G 310 R and KTM Duke 250. Well, before jumping to any conclusion do give a look at what the rivals have got to offer.

KTM Duke 250 is currently available with a BS6 compliant 248.8cc single-cylinder liquid-cooled engine that is capable of producing a massive 30HP and a peak torque of 24Nm. The naked motorcycle comes with a price tag starting at Rs.2.17 Lakhs (ex-showroom, Delhi). In terms of features, the all-new KTM Duke 250 comes with an all-LED headlamp setup, LCD TFT instrument cluster and tubeless tyres on both ends. It is also available with a ‘Supermoto’ ABS which allows the rider to disengage the rear ABS. 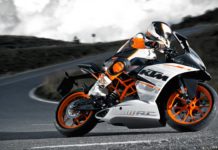 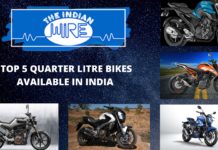 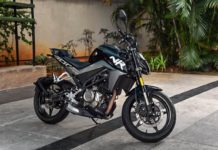