As Asia’s second-biggest energy consumer since 2008, India got ahead of Japan in 2015 to become the third-largest oil-consuming country of the world. The US and China in the list only come ahead of India, said Union Minister of Petroleum and Natural Gas, Dharmendra Pradhan at a meeting in FICCI.

The minister said, ‘we are third-largest energy consumer now but by 2030 we will be No.1 energy consumer’. He added that India will overtake China as the largest growth market for energy in volume terms by 2030.

‘India is moving towards a gas-based economy and investments of about USD 100 billion are underway in India’s energy infrastructure, including renewables’ he said in the meeting.

He said that while India’s energy consumption will grow by 4.5 per cent per annum which is greater than all major economies in the world, the consumption growth of fossil fuels would be the largest in the world.

Talking about the oil and energy need of the country, he said that India is 83 per cent dependent on imports to fulfil the requirements and remaining natural gas come from overseas. He said, ‘We will use a combination of conventional fuel and other more sustainable options to create a balanced energy mix. We will also explore other new and sustainable sources of energy like hydrogen. Technology, innovation will play an important role in this.’

He also spoke about the bioenergy need of the country and presented a roadmap to convert this biomass to energy. He said that India has 600 million tonnes of biomass. ‘On one hand, we are ensuring the highest standards of sustainability through BS-VI, on the other hand, we have made a roadmap to convert this biomass to energy. 5,000 plants are going to be set up for this. Oil and gas PSUs are giving uptake guarantee and price stability. This will also be an answer to the problem of environment pollution’, said Dharmendra Pradhan. 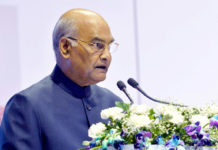