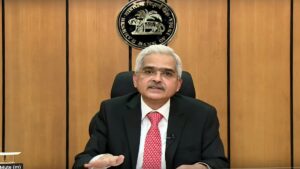 The Reserve Bank of India kept its benchmark repo rate at 4 percent during its August meeting, surprising markets that expected a 25 bps rate cut, to ensure inflation remains within target going forward following a recent climb in prices due to the coronavirus pandemic. The headline inflation rate has been above the central bank’s 4 percent target since the beginning of the year and it is expected to ease only in the second half.

The RBI has slashed the repo rate by 115 bps this year, aiming to support the economy amid a steep recession due to the outbreak.

These decisions are in consonance with the objective of achieving the medium-term target for consumer price index (CPI) inflation of 4 percent within a band of +/- 2 percent while supporting growth.

The inflation outlook is highly uncertain.

As supply lines get restored in the coming months with gradual relaxations in the lockdown, the unusual spike in food inflation in April is expected to moderate. The forecast of normal monsoon also portends well for food inflation. International crude oil prices are likely to remain low, because of the current global demand-supply balance Soft global prices of metals and other industrial raw materials are likely to keep input costs low for domestic firms. Although supply dislocations impart uncertainty to the near term outlook, deficient demand may hold down pressures on core inflation (excluding food and fuel). Inflation can be pulled down below target in Q3 and Q4 of 2020-21, with these factors combined with favorable base effects.

Why the interest rate cut was necessary

As the world is battling on all fronts against the outbreak of COVID-19, India has also been considerably affected by the pandemic. In order to contain the spread of the pandemic, the Government of India announced a nationwide lockdown starting from March 25, 2020. The ongoing pandemic has posed a sizeable impact on life as well as the business of the world’s largest democracy. Though the magnitude of impact on different sectors varies, none of the sectors are completely out of the reach of its repercussions.

The battle with COVID-19 is not only to save the country and its people but also to ensure that the banking channels are working round the clock to cater to the needs of the public as well as the financial market. Needless to say, that banking system is the backbone of any country and its failure or slowdown could lead to multiple issues for developing countries like India. Hence, in order to ease out the unforeseen difficulties being faced by numerous sectors, Reserve Bank of India (RBI) was forced to take these steps.

Impact of the measures taken by RBI

Interest income from FD will slump a little more in future

Impact of the rate cut on borrowers

This rate cut is likely to reduce equated monthly installments (EMIs) of borrowers, and also make it cheaper to take new loans.

Here’s an example of how your home loan is likely to be impacted by the new external benchmark regime.

Existing borrowers- With loans linked to an external benchmark

Borrowers whose loans are linked with an external benchmark. i.e., the repo rate, treasury-bills, etc. as mandated by the RBI can expect to see their EMIs coming down in the next three months. This is because as per RBI’s circular on linking of loan interest rates to an external benchmark dated September 4, 2019, the rates have to be reviewed and reset by banks at least once every three months.

Therefore, today’s rate cut will lower a borrower’s EMI outgo in the next three months. This is the third time RBI has cut the repo rate after the new lending rate regime came into effect from October 1, 2019.

The Finance Minister, Nirmala Sitharaman in the Atmanirbhar Bharat Package, announced the extension of credit linked subsidy scheme (CLSS) under Pradhan Mantri Awas Yojana till March 2021. Under the PMAY scheme, the middle-income group – I (MIG -I) with income between Rs 6 lakh and Rs 12 lakh can avail interest subsidy of 4 percent whereas middle-income group – II (MIG -II) with income between Rs 12 lakh and 18 lakh can get interest subsidy of 3 percent under the scheme. Therefore, the recent rate cut will make the new loans cheaper.