The Indian Wire » Entertainment » Deepika was paid more than Ranveer and Shahid for ‘Padmaavat’- a step towards bridging wage disparity? It’s a patriarchal society and even the entertainment industry is not free from the malice of this practice as we witness the inclination towards the ‘hero’ and his dominance over Bollywood. However, now things seem to be changing for good. Deepika Padukone finally confirmed that she got paid more money than Ranveer Singh and Shahid Kapoor for Padmaavat.

Deepika along with her sister Anisha made an appearance in the talk show Vogue BFFs where the host of the show Neha Dhupia asked her if she was paid more than her co-actors Shahid and Ranveer to which Deepika replied in the affirmative without disclosing any payment details. She said a plain “yes” which was enough to hint that  a shift has taken place in the structure of payment in Bollywood. 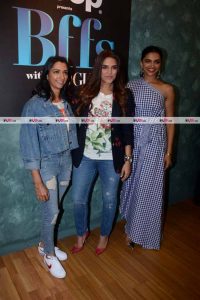 The topic of gender bias in the industry on the basis of wage disparity has been common knowledge to all. A lot of actresses including Priyanka Chopra, Kangana Ranaut, Vidya Balan have voiced their concern over the matter. It’s high time that such a change in the payment trends is seen in Bollywood.

The performance of Deepika in Padmaavat has already begun to make a lot of buzz just within a day of its release. It is only fair that she gets remunerated according to her talent. More power to the women in Bollywood!