Sony Pictures’ supernatural horror film The Grudge, the first nationwide release of 2020, has opened to $11.3 million at the domestic box-office, as per The Hollywood Reporter.

Directed by Nicolas Pesce, the R-rated flick has met with negative response with particular criticism towards its story and over reliance on jump scares. It has a rare F audience rating on CinemaScore.

On the other hand, Disney’s space epic Star Wars: The Rise of Skywalker continues to storm the box-office with a domestic collection of $33.7 million, making a total worldwide collection of $918.8 million. With this speed, the final film in the Star Wars sequel trilogy will touch the 1 billion mark soon.

The adventure film Jumanji: The Next Level, has been also performing well in January, minting $26.5 million in its fourth weekend for a domestic count of $236.2 million.

Greta Gerwig’s period drama Little Women moved up to No. 3 with $13.6 million. After that, it saw a decline of 19 percent in its second weekend. The film has, however, impressive numbers globally, grossing $80.4 million. It has also received two nominations at the 77th Golden Globe Awards for Best Actress and Best Original score. 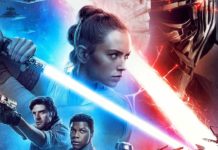