Pokemon Masters is another famous Pokemon game. It is developed by DeNA. The game was released in August 2019. It allows various pokemon trainers to fight. This game is set on the artificial island of Pasio. So far the game has 21 chapters in the main storyline and three interludes. Today, a new event “Lurking Shadows” has started in the game. The game is bringing Giovanni and Mewtwo into the game as Sync Pair for a limited time. The event will last until December 18th.

The event has new story missions that will provide information about the pair. The event will elaborate on how they came to be on the island of Pasio, and what their connection is to the game’s primary antagonists, Team Break. Players will need to collect 800 points to open up a new chapter of the story to recruit Giovanni and Mewtwo. Special event-only items will also be required to unlock its level cap as well as learn moves and skills. There are four stages in particular that will help players obtain these special items. 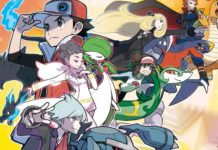